"The Absence" by Bill Hussey 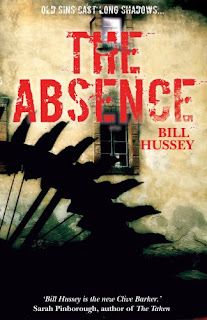 "The Absence"
by Bill Hussey
Format: Paperback, 448 pages
Publisher: Bloody Books
It was a tragic accident. That's what his family told Joe Nightingale, but the boy is tormented by sinister visions of his mother’s death.
Seven months after the fatal car crash, the Nightingales learn they have inherited an old house from a distant relative, the reclusive Muriel Sutton. Hoping to escape the shadows of the past, they decide to spend the summer at Daecher's Mill. But darker shadows await them...
Who are the guests that have been brought here over the years? Why did the late Muriel Sutton murder her little sister, Alice? And what is the connection between Joe and this lonely Fenland millhouse? Something is moving in the attic. It looks and sounds like a little girl, but its eyes are old and its voice runs like water...
It is a weaver of shadows. A creature of Absence...
Bill Hussey made last year an impressive debut with his novel, “Through a Glass, Darkly”. “Through a Glass, Darkly” was the best horror novel I read last year and when I found that Bill Hussey will be publishing his second novel this year, “The Absence”, I was very curious to see how he follows the footsteps of his great debut.
“The Absence” is centered on the Nightingale family, shaken by the tragic loss of the family wife and mother, Janet. One of the things I liked at this novel is how Bill Hussey creates and builds the main three characters, Richard, Joe and Bobby Nightingale. He captures in them a wide range of emotions, each one sounding true and adding a brick at the foundation of their characterization. And because each of them sound so realistic I was drawn closer and closer to the characters and I felt more or less sympathetic to their situations, but in close relationship with their problems. The other characters, with a more or less role in the story, are carefully built as well and every single one playing their role well.
Another thing that attracted me at “The Absence” is the excellent knowledge and documentation that Bill Hussey shows in the setting of his novel. The author makes very good descriptions of the Fens, where the action is taking place, managing to create an almost visual image of the places. Not only the descriptions of the setting denote the passion of the author for the Fens, but also the legends and myths of this area present in the novel. And through a mix between legend and real life situations the story is created.
The author plays in his story with some well known horror elements and themes, making me think of a mix between H.P. Lovecraft and Koji Suzuki but with a lot of personal touch from Bill Hussey that makes “The Absence” a captivating novel and hooked me from the start. The story has many grotesque and powerful images and scenes and what I liked especially at them is that Bill Hussey doesn’t force these elements just for the sake of creating horrific situations, but they come as the needed and fitting pieces in the puzzle. I find the end of the novel a bit rushed and simplistic, but this is compensated by the Epilogue, one that I didn’t see it coming and never crossed my mind.
Personally I enjoyed more the debut novel of Bill Hussey, “Through a Glass, Darkly”, but “The Absence” is not far behind. The novel offers besides a very good horror story a perspective on the career of Bill Hussey and his development as a writer. And if he continues to produce novels like his first two Bill Hussey will easily become one of the heavy names of horror genre.
Posted by Mihai A. at 11:02 AM

That's a good review. Even I don'tlike to read horror. I read reviews like this one in order to get to know a bit more about horror books.

Nice review, as usual :) I really liked this book too but also prefer his debut a little bit more.

Michael, thank you very much. I know that you are not fond of this genre, but there are some very good horror stories that you can enjoy :)

Ben, thank you very much. Although I liked the debut novel more, "The Absence" is better executed and shows real improvement of Bill Hussey. I hope he keeps his works up, because I am a fan already :)

Bogdan, definitely a house to visit :)

Agreed! I think everything he writes will be good!