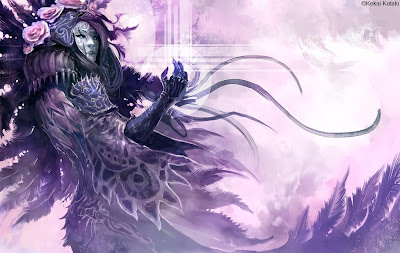 © The artwork presented on this post is used with the permission of its author. All the artwork is copyrighted. Please do not use the images without the permission of the artist or owner.
Kekai Kotaki is an American artist, born and raised on the Big Island of Hawaii. In 2000 he moved to Seattle, Washington to pursue his talent on school and a career in art. He studied in the Art Institute of Seattle between 2000 and 2002 where he graduated with an Associates Degree in Animation, Art and Design. He did freelance snowboard graphics before joining ArenaNet in 2003 where he is working at the present. Kekai Kotaki worked as a concept artist for the Guild Wars series of games and recently his artwork was featured on the cover of a fantasy novel.
Interview - Kekai Kotaki 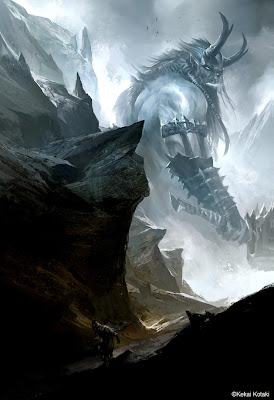 Dark Wolf: Kekai, thank you very much for this interview.
First of all, how did you become interested in art? What made you start drawing?
Kekai Kotaki: I have had an interest in art for as long as I can remember. I still recall me winning my first dinosaur picture book in a kindergarten coloring contest. I guess that set in motion the over active imagination and passion for art that I have today.
Dark Wolf: Did you always wanted to be an artist? When did you decide to pursue your talent in school and career?
Kekai Kotaki: I think I have always wanted to be an artist. It was a talent and a hobby for me most of my life. When you’re young you may or may not think about how you want to spend the rest of your life. It finally kicked in when I was graduating high school and I realized that art was my strong suit. It was then that I decided to go to art school and figure out a way to make an actually living doing art.
Dark Wolf: Which artists and art currents influenced your art? Who is the most influential figure in your career so far?
Kekai Kotaki: As an artist I am inspired by a huge number of different sources. You never quite know where inspiration comes from. But I always tend to look at the artists in the illustration and concept art fields. Icons like Frank Frazetta and Syd Mead. Also others like Jeffrey Catherine Jones, Justin Sweet, Yoshitaka Amano, and the list goes on. I also have a few personal modern day fine artists that I look at too. Jenny Saville and Alex Kanevsky to name a couple. I also love looking at art history too. John Singer Sargent, Andrew Wyeth, George Lambert, Alphonse Mucha, the list is way too big. The most influential figure has got to be my art director Daniel Dociu. He has helped and guided me throughout my career. I can say that I wouldn’t be even half the artist I am now if it weren’t for him. 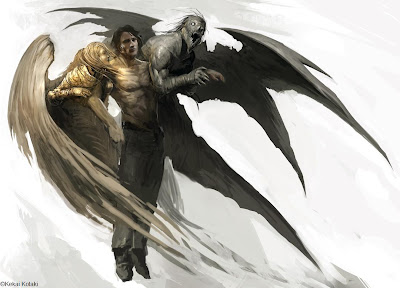 DW: Which tools do you favor on your works, the traditional or the digital ones? Do you have a favorite place where you like to work?
KK: I am a digital artist. It’s not the speed of digital, but really, it is the ability to make changes to my art that makes it so valuable to my work. I am concept artist, so changes is an industry standard. My favorite place to work is… at work. I feel the most comfortable here and that means a lot to me.
DW: You’ve started to work for ArenaNet in 2003 and as a concept artist for the series of games Guild Wars. How did this job opportunity come along? How is working on a computer game?
KK: Well, I wasn’t hired onto ArenaNet as a Concept Artist at first. I was first hired to paint ground textures. Rocks, dirt, grass, you name it and I probably painted it into the ground. A few of my friends were hired before me. So that’s how my name came up. Making a video game is stressful and very rewarding at the same time. Games have a boundless potential for creativity and at the same time some mind numbing restrictions because you have to make a game.
DW: After starting your work with ArenaNet did your drawing technique change? Did you learn new things about art while working on computer games?
KK: My technique did change. Gradually, not in an instant. It’s tied into learning new things about art during my time here. I work with some of the best talent in the industry every day. We share ideas and critique each other’s work. It really is hard not to learn something here. This is one of the great things about working in this industry. You do not work in a vacuum. Everyone helps each other out and shares their thoughts. It helps you grow. 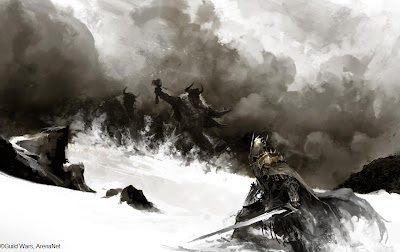 DW: I’ve noticed on your portfolio an attention on details when it comes to weapons or armor. Does this attention comes from the Guild Wars games and the work done for the series of games or do you have a personal interest in weapons or armor? Do these drawings need documentation or depend very much on your own inspiration?
KK: Haha, yeah you might be right about that. Sometimes there is documentation and sometimes there is not. It works both ways.
DW: Your portfolio is focused on the character creation and portraits. Do you prefer to work on characters and portraits more? Would you try to draw more landscapes or scenes in the future?
KK: I have always loved drawing and designing characters. It is a passion in art that I have. I do plan on doing more landscapes in the future. Actually, I have done a bunch of landscape concepts for Guild Wars 2. But I can’t show any of it right now.
DW: You made recently a book cover, how much different is working on a cover art than on concept art of games? Would you like to illustrate other book covers in the future too?
KK: It’s different… but at the same time it is the same. All the things that I try to do with my concepts I try to do the same in a cover illustration. The criteria are different, but in the end I am still trying to covey a story to the audience. 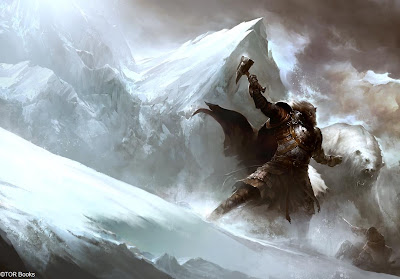 DW: Seeing that you worked on a series games based on a fantasy world and that you illustrated a cover for a fantasy novel, may I ask if you have a personal interest in the fantasy genre or it’s just a professional one? If yes, which fantasy works are your favorites?
KK: I am huge fan of fantasy novels. When I was younger my mom would borrow books from the library. She basically read two genres, romance novels and fantasy novels. I was obviously attracted more to the fantasy novels. Not only because they had some pretty cool art on the cover, but when I would read the back summaries they sounded awesome. Heroes and villains, gods and monsters. They have played a vital role in my development as an artist. Reading a good book is not only one of my favorite past times it is also a huge source of inspiration for me. So I like to say that it is both a personal and professional interest. Right now it is George R.R. Martin and R. Scott Bakker. Bakker is in the lead right now because he released The Judging Eye, while Martin is years into A Dance with Dragons. But both series are current favorites of mine.
DW: Which one do you consider to be the most rewarding moment of your career so far?
KK: Releasing the first Guild Wars is still a high point in my life. Being a part of that was amazing. Also, a very close second, is winning a Silver Medal in the Spectrum annual. It was a dream just being included.
DW: At what are you working right now? What other future projects do you have?
KK: I am currently very busy working on Guild Wars 2. In the future I hope to do more novel covers.
Thank you for your time and answers, it has been a pleasure.
Thank you very much for giving me this opportunity. I had a great time. 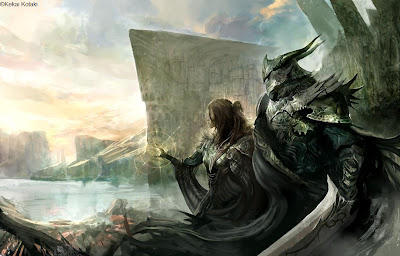 For more information about Kekai Kotaki and for a wider portfolio please visit his website, Kekaiart.com.

these posts are always such a treat.

Thank you very much, Adele :)

I like your almost midevil people doing wierd things you are very talented.

compliments for the architecture and content of your site! I would like my affiliate site on the Elves with your! I expect notices from you, Ale

Ale, thank you very much for your compliments :)

Congratulation Kekai you've made it! Proud of you, Rogue Viking! Always take care.