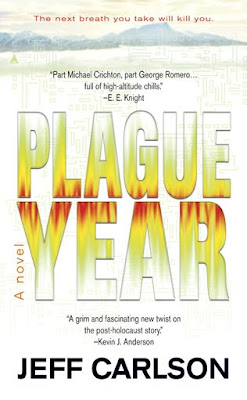 "Plague Year"
by Jeff Carlson
Format: Paperback, 304 pages
Publisher: Ace Books
The nanotechnology was designed to fight cancer. Instead, it evolved into the Machine Plague, killing nearly five billion people and changing life on Earth forever.
The nanotech has one weakness: it self-destructs at altitudes above ten thousand feet. Those few who've managed to escape the plague struggle to stay alive on the highest mountains, but time is running out-there is famine and war, and the environment is crashing worldwide. Humanity's last hope lies with a top nanotech researcher aboard the International Space Station-and with a small group of survivors in California who risk a daring journey below the death line...
Jeff Carlson makes his debut with a post-apocalyptic novel with heavy accents of a thriller, “Plague Year”.
I am a devourer of post-apocalyptic fiction and I enjoy reading the scenarios with which the authors imagine a dramatic future of our world. Such is the case with Jeff Carlson’s novel and what I especially liked at “Plague Year” is that this scenario is so close to reality of our society and with a high probability of coming to pass that it is pretty scary to imagine it. Also throughout the pages of the novel the author captures many essences of the human nature, from the apocalyptic event being born from the will to make good (but isn’t the road to hell paved with good intentions?), the willing to survive and the petty politics and interests. The politics play a major role in the story as well and points to another worrying but possible situation, for humans to ignore the greater damage and danger for the sake of personal interest. Jeff Carlson put me well on thoughts with the premises of his novel.
The novel is told from two major points of view, Cam, a survivor of a plague, and Ruth, a nanotechnology expert. I find the first one, Cam, to be the most interesting character of the novel and one that gained my sympathy and with whom I could relate more easily. On the other hand Ruth and other characters didn’t pick my interest in any point of the novel. They seem a little too thinly built and on some places their interactions and dialogues sound just a bit unrealistic. They don’t seem to move in any particular way as characters and I have to honestly admit that I was rather indifferent to their destiny.
“Plague Year” benefits from a lot of action scenes and is a pretty fast moving novel. Jeff Carlson garnishes the story with many tensioned and fast paced action scenes. Conflicts emerge throughout the plot and draw the reader in their middle, with details that will add to the realism of these situations. However, on some places the author slows the pace down stepping too much on the brake of the story. In this case it seemed to me that the novel created a sinusoidal line, but luckily with just a few such ups and downs.
“Plague Year” is not the best or the strongest post-apocalyptic story I read, but the premises and the pace of the Jeff Carlson’s novel offered me a fast and relaxing read.
Posted by Mihai A. at 10:42 AM

I've never read about nano-technology killing us off before or at least I can't recall such scenario in my head. Does Carlson describe what actually happens to humans, when they catch the plague? I think they should desintegrate or something like thatbut who knows. As a debut I think it's a decent enough novel and the whole pacing is something not only beginner writers struggle with, so it's safe to say that we will hear more from Jeff Carlson

I enjoy a lot this first novel of Jeff Carlson. It`s not the best literary text but the action and the character are very well made.
Yes, he`s explaining a lot about the nano things, how they started, why and how they atack people. It`s a book that needs to be a must for all the apocalyptic scenarios lovers.

Harry, I believe that "I Am Legend" has a similar premise with a pandemic apocalypse. Jeff Carlson describes the consequences of the loose nanotechnology :)

Bogdan, I think too that the lovers of apocalyptic scenarios will enjoy this novel the most :)

Michael, indeed "Plague Year" has a lot of action. The novel will be published in Romanian soon as well :)

Oh, this makes it even more interesting and well to be honest, who doesn't enjoy a disease as the harbringer of impending doom for humanity. It's better for humans to blame sudden mutation rather than take the blame for everything.

We have just added your latest post """Plague Year" by Jeff Carlson"" to our Directory of Science . You can check the inclusion of the post here . We are delighted to invite you to submit all your future posts to the directory and get a huge base of visitors to your website.