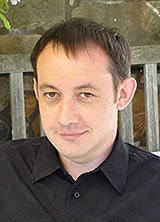 Mihai, thank you for posting the guest post.
Brian, thank you for the guest post. I think without any talent you can't write a book. You can learn techniques but nothing more. I don't have a talent to write a book. Even to write a review wasn't successful. But that doesn't matter because I have the gift to love and read books. To read a good book is like cinema in head. Beside this I like to put in my two cents in the form of comments related to posts :>)

The whole Godless World trilogy is on my shelf.
So far I read Winterbirth which I really enjoyed.

I hope you will write more books in future. I don't ask for dates. First of all I need to read the remaining two books of Godless World.

Brian shows a nice insight in his process of writing. I think that Brian Ruckley is a talented writer and I'll look forward to his next works.