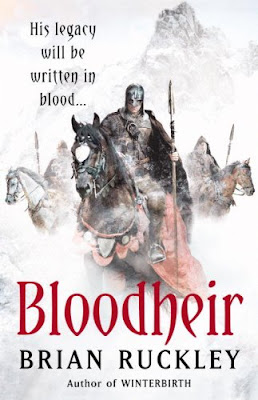 "Bloodheir"
by Brian Ruckley
Format: Hardback, 544 pages
Publisher: Orbit Books (UK)
“Bloodheir” is the second novel in the Brian Ruckley’s “The Godless World” series and is following the events described in “Winterbirth”.
The war is spreading and following the initial success the Black Road numbers increases and their army is growing. The Black Road continues to march south and to battle the True Bloods. Aewult, the Bloodheir of Haig, is certain that he will achieve a quick victory in front of his army and will therefore make his Blood more powerful. Banish by the Black Road Aeglyss the na’kyrim will return with renewed power and with new allies. And Orisian, the new Thane of Lannis Blood, will have to fight for his people with old and new enemies.
Brian Ruckley continues his story in a pleasant way and I will admit that I was hooked since the beginning and I enjoyed his second novel even more. The story flows naturally and the conflicts and the events presented in the first novel of the series continue to grow and be built toward a high point. The world is revealed further on and I really liked how the author described different towns or places of this world. Many times the descriptions caught my attention and sometimes I felt like looking at postcards or pictures of the specific places.
The politics of this world and the machinations and interests surrounding it were other aspects which I really enjoyed on “Bloodheir”. All the wheels of politics are rotating in a realistic way and the ambitions of the different houses, the personal likes and dislikes, the religion influence the movement of these wheels. And I believe that Brian Ruckley made a very good job in creating the politics in the way of medieval era, with which his created world resemble.
I liked the development of the characters too and I rediscovered the ones I liked in the first novel with pleasure. But besides those I did enjoy discovering others too. I liked Kanin, but “Bloodheir” made me become sympathetic with his sister, Wain, too. I become more involved in the story of Taim Narran and I watched the course of his actions with an increasing pace in the page turning. Mordyn Jerain, the very interesting chancellor, does seem to develop, but his side of the story is catchy. I still liked this character a lot and the end of the novel makes quite a captivating promise for the outcome of him. Orisian remains the character which attracts me the least, but I will not complain because on the big picture he plays his role. The author introduces some new figures in “Bloodheir”, but most of them have only short appearances. However, Brian Ruckley seasons their short story in a way that doesn’t leave an unpleasant feeling of their passing through the main story.
My absolute pleasure of “Bloodheir”, like in “Winterbirth”, remains the battle scenes. I believe that Brian Ruckley shows a great talent in the description on these scenes. He carefully builds the battles, adding on the canvas of these scenes from the background picture to the smaller details, combining the sensations of sound, color and movement in a way that made me believe that I was magically transported to the actual place of battle.
“Bloodheir” has its weak spots and is not without flaws, but I will not complain. Its flaws and shortcomings are overwhelmed by all the aspects that kept me turning the pages and captivated me that I prefer not to mention them at all. I believe that Brian Ruckley’s “Bloodheir” is a very good novel, one which I really enjoyed, and I eagerly wait for the third novel in the series, because the setting and the events built in the first two novels promise a very interesting reading.
Posted by Mihai A. at 11:11 AM

This has been sitting on my TBR pile for awhile Reading your review makes me want to move it to the top.

I warmly recommendate it, but I don't think it reads the same without "Winterbirth" :)

I'm going to put Brian Ruckley's books on my waiting TBR list as I tend to enjoy the medieval stories the best.

Me too :) I have a very weak spot for Medieval stories. For that era of history too :)

I really enjoyed this series as well--Can't wait for Fall of Thanes!

I can honestly say that is one of my favorite series. And I can't wait for the "Fall of Thanes" too :)