"The Guin Saga Book One: The Leopard Mask" by Kaoru Kurimoto 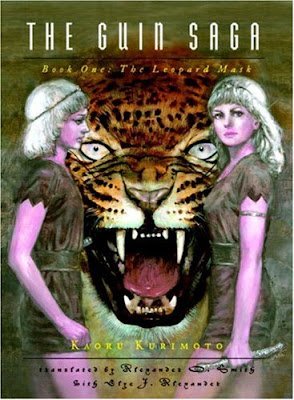 "The Guin Saga: The Leopard Mask"
by Kaoru Kurimoto
Format: Paperback, 288 pages
Publisher: Vertical Inc.
“The Leopard Mask” is the first novel in the “Guin Saga” series, a heroic fantasy saga written by Kaoru Kurimoto, which has reached a recorded number of 123 volumes until 2008.
In a dangerous and haunted forest two twin children, Rinda and Remus, who escaped from an attack on their home land, Parros, meet with a strange character, a warrior who wears a leopard mask and doesn’t remember where he comes from. After a night full of events they are taken prisoners by a Mongauli patrol and brought to Stafolos Keep, ruled by the dreadful Black Count.
Kaoru Kurimoto sends the reader into action since the beginning of the novel. After a small prologue I was introduced in the middle of events, with a high pace and with events kept in a rapid rhythm. Along this high paced action I could find a great number of fighting scenes and although these particular scenes are not the best I read are pretty enjoyable. However I believe that the story would have benefit more if those fighting scenes were reduced in number. Also I didn’t liked two scenes in particular, one of them being the end, and I found these scenes too melodramatic and more appropriate for a Hollywood action movie. These scenes are so hard to believe that I will always have a problem with such scenes, particularly in my readings.
The story is centered on three characters, Guin, the leopard-masked warrior who doesn’t remember anything about his past beside a name Aurra, Rinda and Remus, the twin princes of Parros who survived the attack and the conquer of their home by the Mongauli warriors. I wasn’t particularly attracted by any of the characters and they woke mixed feelings in me throughout my reading. I was rather impassible toward Rinda, a bit sympathetic with Guin and rather annoyed by Remus, who in my opinion behaves like a spoiled prince and not like a surviving one. The negative character is a mystery and I enjoyed him the most. Unfortunately his story fells short at the end and I found the resolve of his mystery a little forced.
The world-building is the most interesting, but it is not fully developed. The author introduced me to her world and I could find a little bit of history, a little bit of geography, a more detailed fauna and flora and a reach pantheon of deities. But like I said despite many attractive aspects of world-building it seems underdeveloped. However I believe that the world-building and the characterization of “The Leopard Mask” is only an introduction in the series and a familiarization of the reader to the general setting. And I believe that if these aspects aren’t developed in the next novels than this series will not meet my expectations for a fantasy novel.
“The Leopard Mask” is a quick and action packed read. Kaoru Kurimoto’s novel will not reach a best of list, but will not touch the bottom either, and I will read the next novels in the series because I have hopes for the general setting of the “Guin Saga”.
Posted by Mihai A. at 12:13 PM