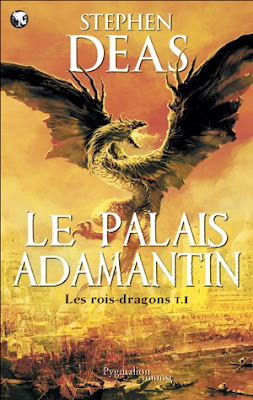 I am beginning to fall helplessly in love with the French cover artwork. And it is hard to resist when they produce cover illustrations like this one. This is the cover art for the Stephen Deas’ debut novel, “The Adamantine Palace”, published by Gollancz in March this year and which was released on the French market by Pygmalion on 17th of June. The cover illustrator is Alain Brion, as it is stated on the book page on the Pygmalion Fantasy website. And although the dragon on the cover is not exactly as Stephen Deas would have seen it I still believe that it’s a wonderful and powerful illustration.
Posted by Mihai A. at 12:01 PM

I always saw my dragons as having six true limbs and this one has four, but that was an observation more than a gripe. It's a fine dragon, alright. A real monster, just as it should be :-)

Stephen, thank you very much for visiting my blog :)
I believe that you know the best how your dragons look like. But the French edition of your novel has a great cover nonetheless :)