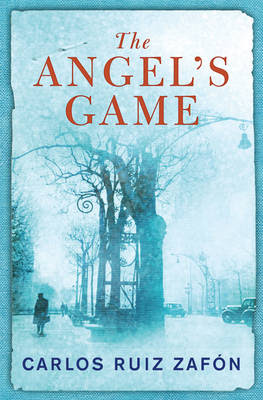 The best novel I read in years is by far Carlos Ruiz Zafón’s “The Shadow of the Wind” (which I reviewed here). One of the titles I am eagerly waiting to read this year is the next novel of Carlos Ruiz Zafón, who easily becomes one of my favorite writers, “The Angel’s Game”. My waiting is over because Orion Books releases today “The Angel’s Game”. One thing I regret though, that I will not be able to meet Carlos Ruiz Zafón since he will be signing books between 1st and 3rd of June in London. Well, maybe with the next chance.
'The whole of Barcelona stretched out at my feet and I wanted to believe that, when I opened those windows, its streets would whisper stories to me, secrets I could capture on paper and narrate to whoever cared to listen.'
In an abandoned mansion at the heart of Barcelona, a young man, David Martín, makes his living by writing sensationalist novels under a pseudonym. The survivor of a troubled childhood, he has taken refuge in the world of books, and spends his nights spinning baroque tales about the city's underworld. But perhaps his dark imaginings are not as strange as they seem, for in a locked room deep within the house lie photographs and letters hinting at the mysterious death of the previous owner.
Like a slow poison, the history of the place seeps into his bones as he struggles with an impossible love. Close to despair, David receives a letter from a reclusive French editor, Andreas Corelli, who makes him the offer of a lifetime. He is to write a book unlike anything that has existed - a book with the power to change hearts and minds. In return, he will receive a fortune, perhaps more. But as David begins the work, he realises that there is a connection between this haunting book and the shadows that surround his home.
Set in the turbulent 1920s, THE ANGEL'S GAME takes us back to the gothic universe of the Cemetery of the Forgotten Books, the Sempere & Son bookshop, and the winding streets of Barcelona's old quarter, in a masterful tale about the magic of books and the darkest corners of the human soul.

So many good books this year!

This is going to be a great one. I think rather than reading it right away I'm going to have to save it for a special day...

I have to buy lists for every month. I have a lot of pre-orders. Anyway I hope to get the book within this year.
Anyway I look forward to your review.
OnSaturday I received my first hardcover for a long time. Normally I don't buy hardcover due to price and space. But I couldn't withstand to buy NIGHTS OF VILLJAMUR by Mark Charan Newton. I read 120 pages so far and I really like it.

Adele, indeed they are. And reading pile is growing even larger with each day :D

Ben, I believe so too. And Larry, who recommended me Zafon in the first place, says that this one is even better :)

Michael, I usually don't make pre-orders. I don't know exactly why, but I tend to go with titles already available :)

I read this one in Spanish too last year and overall I liked it a lot, comparable to Shadow of the Wind, maybe a bit more.

The book is much more overtly fantastic and considerably darker.

I would urge anyone who has not read SoW to read Angel first and then SoW.

The prequel setting takes away part of the suspense since (if you read SoW) you know what will happen with a bunch of characters and while the suspense is gone on re-read anyway, here I got the feeling that the necessity to match the later events of SoW constrained the author somewhat.

Also the SoW structure gets repeated here and that is another minus, since the first time (two similar couples separated in time)it was original, here it is a repetition.

IF Angel's Game were to have been the first book in the series, I would have had no qualms calling it a masterpiece; this way, it is "just" excellent

This looks really good. I'll have to add it to my to read pile :)

Liviu, thank you for sharing your thoughts on the novel :)
I would like to read in Spanish as well, but I am just at the beginning level with Spanish. Maybe someday I'll be able to read in Spanish too.
And "just" excellent I think is enough for me in this case :)

Cindy, I can recommend enough "The Shadow of the Wind" if you didn't read it yet :)

With the competition of getting books published, the stories have to be top of the line.

I eagerly await your review.

I think you are right Barbara, there is a tough competition for the best books.
I also think that there are many authors like Zafon that deserve to be read in every language :)

"The Angel's Game," by Carlos Ruiz Zafon is the kind of book where you can hear men's shoes scuffing across a wood floor in an empty mansion filled with candles and secret passageways. Where some people take long lunches filled with wine and cheese, and when they settle in with a good book, the spine creaks. Anyway, if you have time, take a visit at my Free Games website.