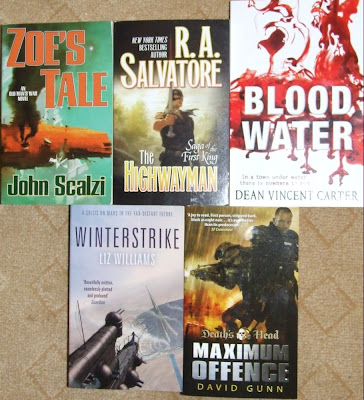 With the order for Carlos Ruiz Zafón's "The Angel's Game" already placed and waiting for it to be delivered, here are my latest arrivals in the mailbox:
- "Zoe's Tale" by John Scalzi (through the courtesy of TOR UK);
How do you tell your part in the biggest tale in history?
I ask because it's what I have to do. I'm Zoe Boutin Perry: A colonist stranded on a deadly pioneer world. Holy icon to a race of aliens. A player (and a pawn) in a interstellar chess match to save humanity, or to see it fall. Witness to history. Friend. Daughter. Human. Seventeen years old.
Everyone on Earth knows the tale I am part of. But you don't know my tale: How I did what I did — how I did what I had to do — not just to stay alive but to keep you alive, too. All of you. I'm going to tell it to you now, the only way I know how: not straight but true, the whole thing, to try make you feel what I felt: the joy and terror and uncertainty, panic and wonder, despair and hope. Everything that happened, bringing us to Earth, and Earth out of its captivity. All through my eyes.
It's a story you know. But you don't know it all.
- "The Highwayman" by R.A. Salvatore (through the courtesy of TOR UK);
Long ago, in a distant land, a lonely young man struggles to discover who he is and where he belongs. He carries the blood and magic of two peoples, a sword of unimaginable power, and a staggering potential for great good . . . or greater evil.
In the land of Corona, the roads are unsafe to travel, as goblins and bloodthirsty Powries seek out human prey; and, in this savage world, princes feast while peasants starve, and two religions battle for control.
A monk, Bran Dynard, returns from his mission in a far-off land with two prizes: a book of mystical knowledge and a new wife, the beautiful and mystical Sen Wi. But the world he left behind has changed, and Bran must now decide who he can trust, and where he should place his faith . . .
- "Winterstrike" by Liz Williams (through the courtesy of TOR UK);
Winterstrike spy Hestia Mar has been sent to Caud to recover details of an ancient weapon. During her stay in the Martian city, she encounters the ghost of a warrior, who turns out to be the encoded representation of the city’s bombed library. Hestia Mar manages to access the library’s data, but realizes too late what she has done: by downloading the information, she has virtually guaranteed the use of the weapon against Caud by her own government. Desperate to rescue the situation she makes her way back home across the dangers of the Crater Plain.
Meanwhile, in Winterstrike itself, the festival of Ombre has been taking place upon the eve of war. Hestia's cousin Shorn –imprisoned by her family for accidentally consorting with a male – manages to escape. Her sister Essegui, pursuing her to the dangerous mountains of Mars, discovers a plot by creatures who hold the secrets of the Martian past, and its future. While Essegui battles forces back in Winterstrike, Hestia travels to Earth in an attempt to save her city . . .
- "Blood Water" by Dean Vincent Carter (through the courtesy of Corgi Childrens);
They’re all dead now. I am the last one.
Dr Morrow can’t identify the ‘thing’ he found living in the lake but he knows it’s dangerous . . . then it goes missing . . .
Caught in the flood that is devastating the town, brothers Sean and James stumble across Morrow and the carnage left at his lab. The missing specimen is some kind of deadly parasite that moves from person to person, destroying its hosts in disgusting, gory ways.
The death toll will rise along with the waters unless the brothers can track down the homicidal specimen and find a way to destroy it.
- "Maximum Offence" by David Gunn (through the courtesy of Transworld Books).
The Aux have been dropped on a far-flung planet called Hekati, only it's in Uplift space and not really a planet at all. As for their mission, it's so damn secret that General Jaxx hasn't even told Lieutenant Sven Tveskoeg what it's about. It appears a citizen of the United Free, an empire not only more vast than Octo V’s but far more technologically advanced, has gone missing on this artificial world and it's up to Sven and the Aux to find the poor soul. But Hekati is a realm where nothing is quite as it seems and no one can be trusted. Smelling a rat, Sven is so not happy - and when he's not happy is when bad things start to happen - and the body count starts to rise...
The devil-may-care not-quite 100% human mercenary soldier-cum-killing machine Tveskoeg and the Death's Head squad are back: cue more extreme violence, a mega death toll, dirty sex, fiendish plot twists and explosive, non-stop action!
Thank you all very much!
Posted by Mihai A. at 12:22 PM

I heard only good things about both of them :)

Still waiting to get my hands on Zoe's Tale, have loved the rest of the books in the Old Man's War series.

I am not familiar with the Death's Head books, but I read some good things about them. So I should get to them this year :)