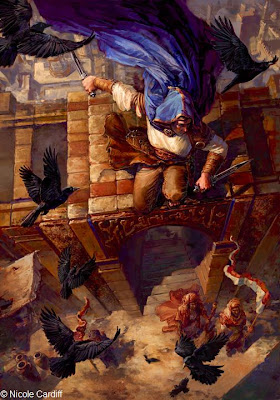 © The artwork presented on this post is used with the permission of its author. All the artwork is copyrighted. Please do not use the images without the permission of the artist or owner.
Nicole Cardiff is an American artist currently living in Los Angeles, California. She graduated the Savannah College of Art and Design with a Bachelor of Fine Arts degree. Nicole has been honored by the ImagineFX Magazine as a Rising Star or featured artist under 25. She works as a freelance artist and her works have mainly fantasy themes. Throughout her career she made concept works for FunCom, RedMist Castle and Isotx, cover and interior illustrations for Dragonmoon Press, Wizards of the Coast, Eden Co/Hachette and White Wolf among others and textbook and promotional illustrations for National Geographic/Harcourt, GenCon UK and Fantasybookspot.
Interview - Nicole Cardiff 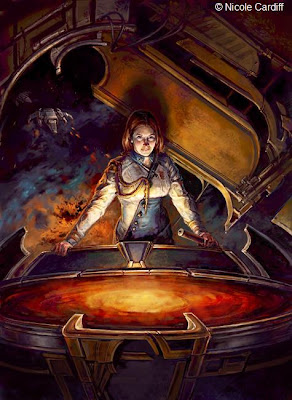 Dark Wolf: Nicole, thank you for the opportunity of this interview.
How did you become interested in art? What made you pick up the pencil and draw for the first time?
Nicole Cardiff: I distantly remember doodling stuff as a little kid because I wanted to draw the stuff in the fantasy stories I read (mostly unicorns and horses.) I dropped it until about middle school, when I started practicing a little more seriously and drew a lot of superheroes, since I discovered comics around the same time, so I transitioned into figure drawing from there.
Dark Wolf: Who are your favorite artists? Who do you consider to be the most influential figure on your career so far?
Nicole Cardiff: That's a long list. I really love the Orientalists, Gerome in particular, for their balance of detail with tightly controlled value; they can have areas of very detailed pattern or texture in their pieces, but because the values are so well planned, they never feel busy. N.C. Wyeth and Dean Cornwell are also big influences for me, as I love their sense of drama and their compositions – they were both masters of using light and shadow to their advantage. As for living artists, I'm a huge fan of Donato, Greg Manchess, and Jaime Jones.
If I had to pick one, though, it'd be Wyeth – studying his work over the years has taught me a lot of things about how to compose and use color.
Dark Wolf: In sport it is said that to achieve great results it is needed 20% of talent and 80% of work. Do you consider that such a statement is true in art as well?
Nicole Cardiff: Hmm. For art, I'd argue it's 60% pure stubbornness (just plugging away, having a good work ethic, and continuing to paint and draw no matter what), 20% training, 15% networking, 5% talent. Art's not really like sports – it'd be pretty difficult for someone to inherit anatomy knowledge, as opposed to good genetics for muscle growth. A good work ethic will take you the farthest, and training under good teachers will definitely speed along your artistic growth – you need a good portfolio to get anywhere in the first place. However, in the competitive professional world, you definitely need to do some amount of networking or you'll starve for work unless you're a knockout talent. The people I've known who aggressively promoted themselves actually did better than those who did little to no self-promotion but were more skilled.
DW: Is there one aspect of your art you are mostly satisfied with? What would you like to further improve on your style?
NC: I'm mostly satisfied with my color sense, but I'm still working on virtually everything else! I'm currently trying to push my compositional and anatomy skills. 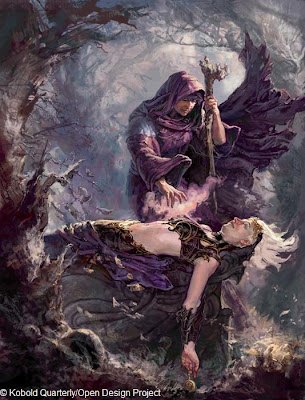 DW: I read that last year you painted over 90 works. What is your rhythm of work? Do you like to work in certain conditions?
NC: I usually thumbnail out pieces until I'm happy with the rough, do a sketch, shoot reference if time and budget make it feasible, clean up the sketch some more, send the sketch to the client, make any required changes, block in colors, and then add detail. I usually try to have two pieces going at a given time so that I can switch while I'm waiting to hear back from clients, possibly a third piece of personal work depending on how heavy my schedule is.
DW: I’ve seen that your favorite method is starting a sketch and after scanning it you paint it digitally. Do you work exclusively using this method or do you use other methods as well?
NC: Yup, I pretty much exclusively do that. Drawing's still easier for me with a pencil, but everything else is easier on a computer.
DW: The predominant theme of your works is fantasy. Is fantasy your favorite genre, in art and outside art domain? Is it easier to work on a favorite theme than in other which is not exactly on your liking?
NC: I definitely prefer reading fantasy and doing fantasy briefs, but I'm not hugely attached to it; how interesting the brief sounds tends to trump subject matter. I tend to prefer briefs where something's happening to the characters just posing in a field somewhere.
DW: Do you have a favorite work of fantasy? Do you like a fantasy author in particular?
NC: I like George R. R. Martin's Song of Ice and Fire and Guy Gavriel Kay – I usually prefer grittier, low-magic worlds in general. 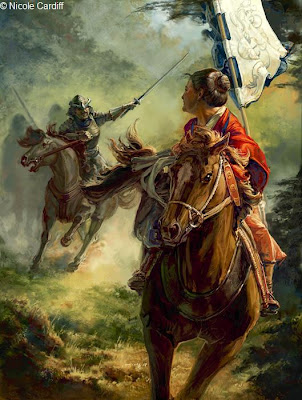 DW: I’ve also seen that another preferred theme is history. What period of history is your favorite? Do you like your historical pieces to be as accurate as possible or do you like to improvise on them as well?
NC: I tend to go for a middle ground – I do tend to research the clothing/armor of the period, but if it's a choice between accuracy and a good painting, I'll serve the painting first unless there's a good reason not to do so. (A good recent example was when I did some Japanese warriors; if I were being accurate, all of their stirrups should have been visibly non-Western, but I knew most people would think I had just painted them wrong.)
DW: Seeing that you made many book covers, what would be one novel you would like to make the cover for, if it were possible?
NC: I really loved S. M. Stirling's In the Courts of the Crimson Kings recently; it'd probably be a tossup between that and the Arabian Nights, at the moment. I really love action-adventure stories.
DW: Looking over your portfolio I’ve noticed that in many of your works blue is the favored color, in its different nuances. Is blue your favorite color? Do you tend to consciously use the different shades of blue or does it happen sometimes to choose the color unconsciously too?
NC: Blue is indeed my favorite color. I really love the way deep shades of ultramarine look, particularly with orange, so I tend to use that combination when I can swing it. It's one of my few holdovers from painting traditionally in art college, since when I painted in gouache, you could get these unbelievably lovely, saturated deep blues. I also tend to default to blue as it contrasts skin tones nicely.
DW: I also noticed that your portfolio tends to concentrate on portraits or characters. Do you think that your talent is better put to value by the work on portraits and characters? Do you consider that your work on landscapes or scenes needs to be improved?
NC: I'm definitely a lot more interested in painting people than in painting architecture or landscapes. I'm sure my perspective and inorganic form painting could absolutely stand to improve, and I probably will end up working on my architecture at a later date, but as it is, I very rarely get professional calls that involve that stuff. 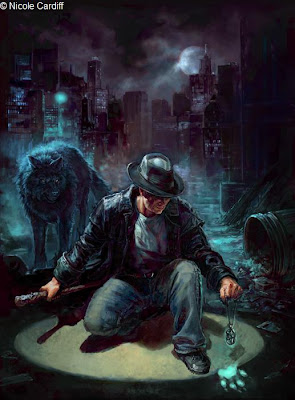 DW: From your commissioned works, which one was the most enjoyable to make? Do you have one that needed an increased effort to make and gave you a difficult time while making it?
NC: Hmmm. The pieces that I did for Warlord were generally a lot of fun – most of them had fairly loose briefs and were definitely action shots. Unfortunately most of my answers to this from the past couple of months I can't actually show or discuss the specific pieces (they're still under non-disclosure agreements.) The work I do for Wizards almost invariably requires a lot more thumbnail planning than most, since they tend to want a lot of specific details in their illustrations. One I can actually show that I struggled with was the Warlord Soul Hunter piece I did a while back – it was tough getting the water to look like water droplets, as it looked like weird goop for most of the time I was fighting with it.
DW: ImagineFX Magazine in one of their issues named you a Rising Star. Did this fact change your career? Did their statement put a pressure on you?
NC: Not really. I think I might've gotten some more job opportunities in the UK than if I hadn't been lucky enough to get that, but I think most publicity just adds a few more snowflakes to a (very) slowly snowballing career.
DW: What would be a difficult job opportunity to refuse? Would you like to work in a certain art domain in the future?
NC: Someday, I'd really like to do something like the work Wyeth did with Treasure Island, where the artist is commissioned to do ten or twelve color illustrations for a novel. I think it would be interesting to have a long-term job like that, but I'm not sure how much of a market exists for that kind of thing anymore. More realistically, I'd love to break into the larger publisher genre book cover market, though lately I've also been contemplating attempting to transition into either video game or film concept work (the money's pretty tempting.)
DW: At what are you working at the moment? What other future projects do you have?
NC: I'm mostly working on private commissions at the moment, and I'm an artist-as-needed for Kramaley Games, which has been a really wonderful client relationship for me. I'm sure I'll keep working for Sony for the foreseeable future, as well.
Thank you very much for your time and answers. 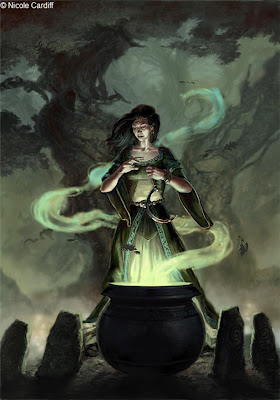 This is totally awesome stuff--and a great interview!

This is going to remain one of my favorite interviews. I'll link to it from my blog this weekend.

I love the colors (of course blue/purple happens to be my favorite color too!). Just fabulous stuff.

Maria, thank you very much :)
I think that Nicole uses the blue shades very well. I am glad you like it :)

S.M., indeed there are some really good pieces :)

I've been following her career for a few years now and she's great and keeps getting better. She's probably one of the more under-appreciated artists out there.

TK42ONE, Nicole really improved her works. I've seen her gallery from the beginning until present days and it looks better and better. I hope to see more of her works in the future :)

ReClip, thank you very much :)

Barbara, thank you very much. Nicole has a truly exceptional talent :)