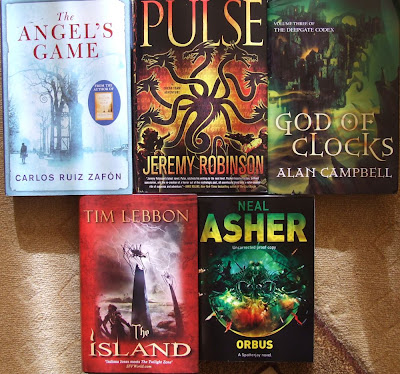 Awesome haul! Some of them look really interesting. I look forward to your reviews. Happy reading!

"Scar Night" was enough to make me not want to read Alan Campbell again, but apparently I'm the only one as everyone else seems to think it was great.

I still haven't read any Tim Lebbon and need to fix that...

Am saving "The Angel's Game" until a vacation or some similarly relaxing time. That one's going to be special...

I do not like Alan Campbell either though Robert loves his books.

I got Orbus too and it starts great (I am a big Asher fan and read all his novels and most of his ss) but I will read it in a week or two since I have a bunch of June or July books I want to finish first.

On Angel's Game I am still stuck in the middle of my 3rd read (first in English) so I postponed the review for early August; I loved it a lot on the first two reads, but now there is something there (the prequel limitations that started looming larger on this 3rd read) that stops me from fully enjoying and I want to finish this read before doing the review - the advantages and disadvantages of doing reviews at some time like a year from first read the book; you gain perspective but see more flaws...

Jo, they are looking interesting indeed. Thank you :)

Ben, I didn't read Alan Campbell's novels yet, so I can't say anything about them. But I recommend Tim Lebbon's works. I like them and I find them to be good :)

Liviu, every re-reading points us to things that we might miss on the previous ones. I am looking forward to read "The Angel's Game", because I loved "The Shadow of the Wind" and I liked Zafon's style. I also have high expectations.
As for flaws, if I am more than satisfied with the book I tend to ignore them :)

I won Fallen by Tim Lebbon at a giveaway. Read 100 pages so far. Good stuff! I definitely will read more Tim Lebbon books.
The Island takes places in the same world like Fallen.
And not to forget Dusk and Dawn...

Beside this The Angel's Game is on my list because I loved The Shadow of the Wind so much.

Hope you enjoy Pulse! If you enjoy James Rollins or Matthew Reilly, you should dig it. Looking forward to your review. And hey, if you want to do an interview, just let me know. :)

Michael, I like Tim Lebbon's works a lot (the ones I read so far ;)). As for Carlos Ruiz Zafon what can I say, I love him :D

Jeremy, thank you for your visit. And after the review I hope we can make an interview :)