© The artwork presented on this post is used with the permission of its author. All the artwork is copyrighted. Please do not use the images without the permission of the artist or owner.
Jesse van Dijk is a Dutch artist born in 1977. He graduated in 2003 the Delft University of Technology with a Masters Degree in Industrial Design. He worked for three years at Playlogic Gamefactory as a concept artist and from 2006 is working at W!Games. In January 2008 his piece “Sea Creature” won the Gnomon Image Challenge. Jesse works as freelance illustrator as well and he produced lately a few book cover artworks.
Interview - Jesse van Dijk 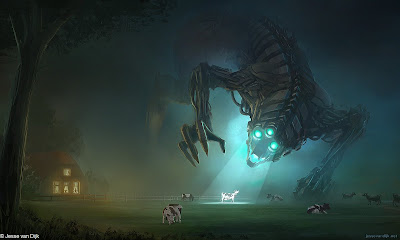 Dark Wolf: Jesse, thank you very much for the opportunity of this interview.
What attracted you towards art? What is your first recollection of art?
Jesse van Dijk: My parents kick started my interest in art. My mom used to be an illustrator, and my father's a musician, so I was influenced by it from a young age.
Dark Wolf: What influences has your art? Who are your favorite artists?
Jesse van Dijk: I'm mostly inspired by real-world places. For example, last month I went to Bruges in Belgium, which I had never been to, to take reference pics of the old city. Trips like that really fuel me for weeks on end.
Dark Wolf: You have a Masters degree in Industrial design. Does your experience in industrial design help you in your freelance works? Does this experience make the work on some art pieces easier?
Jesse van Dijk: The background in Industrial Design helps me in my process mostly. Especially at my fulltime job at W!Games, process management is important.

DW: What made you decide for a freelancing career and not following a career in industrial design?
JvD: I guess I've always longer for something more spectacular than everyday products. I think I'm a bit too romantic for designing coffee machines and such :)
DW: Your art seems to be focused on Science Fiction and Fantasy genres. Is your interest in these genres professional or is it personal as well?
JvD: It's mostly personal, but at the end of the day I really don't mind what genre I work in. As long as the final product is of sufficient quality, I'm happy.
DW: What inspirations do you have when it comes to SF and Fantasy artworks? Do you like to create your own worlds too?
JvD: Yea, I consider world creating to be the most fundamental part of what I do. For me, it should never be about pretty pictures, but always about ideas. 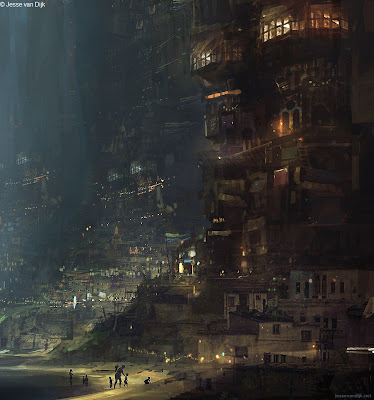 DW: What sources of inspiration are behind such created worlds? Do you picture the final image in your mind before starting to draw it in this case?
JvD: Sometimes I do, but on other occasions I completely switch the image around halfway. It's something I've really learned at my work at W!Games, to never be afraid to kill my darlings and improve on something I thought to be finished at an earlier moment.
DW: Such a world is depicted in your Project Indigo. Can you explain this project a little, please? Would you like to develop this project further on and maybe gather it in an art book someday?
JvD: The whole concept of a vertical city is something that just fuels the imagination, and I had long planned to visualise some ideas about it at some point. It's one of those cases where you're designing a place you would really want to live. Well, I do anyway :)
I've had a crazy amount of visitors on my website because of Project Indigo (over 350.000 unique visits in three months or so) so undoubtedly I'll continue it at some point in the future.
DW: One of my favorite pieces from your portfolio, “The Labyrinth of Tsan-Kamal”, has also a short fiction story. Do you like to create such stories for some of your art pieces? What happens to come first to mind, the story or the image?
JvD: Both are being created simultaneously for me really. The image helps me create a story and vice versa. I usually do this for all my pictures, but in this case I liked it enough to put it up there with the image.
DW: Speaking of association between words and art I’ve seen that some of your artwork was used for the covers of different novels. Do you enjoy this kind of work? What satisfaction brings the illustration of a book cover?
JvD: Yea, I love book covers, because they're so different from concept art. A book cover is just a single image based on a story, whereas doing concept images usually means being a lot more explicit about a lot of things. Also, doing concept art for large productions means you have to keep track of many things that aren't even in the image you're creating (design consistency, contrast on a macro scale, and such).

DW: Is there a particular novel for which would you like to make the cover?
JvD: Heh, yea, I would love to do the cover for John Wyndham's "The Day of the Triffids", a book I've read quite a few times.
DW: You won a Gnomon Image Challenge in 2008. How did you felt when you won this challenge? Would you like to win a particular award in your artist career?
JvD: Participating in the Gnomon Challenge was never about winning any awards, although I was happy to have won it. Entering competitions allows me to worry about less aspects of a painting: you're handed some form of context (a story or theme), which I find very comfortable.
DW: What is your most rewarding moment of your career so far? Which one do you consider to be your best piece?
JvD: I don't really have a best piece, only ones that are less awful than others :)

DW: What immediate and future plans do you have?
JvD: There will be some changes in the projects I'll be working on in the coming months starting from July 2008. Unfortunately I can't say too much about them yet, so check out my website at http://www.jessevandijk.net/ to stay tuned.
Thank you very much for your time and answers. It has been a pleasure.

For other information about Jesse van Dijk and for a more comprehensive portfolio please visit his website, jessevandijk.net.
© The artwork presented on this post is used with the permission of its author. All the artwork is copyrighted. Please do not use the images without the permission of the artist or owner.
Posted by Mihai A. at 12:51 PM

Really astonishing works, thank you for this. What a great artist!!

It is Sunday morning. Family is still sleeping. So I use my time to work on my google reader items.
Your post is from 5th of June and today it is the 5th of July!!
Anyway I wanted to leave a comment because Jesse van Dijk's art is gorgeous and bewitching. I can't decide at the moment which of his work I like most. I had a look at the Project Indigo. Didn't know it before. It is incredible. I need to spend more time on Jesse van Dijk's site. The interview gave a lot of information.
Excellent work Mihai!

Thank you very much, Michael :)
Project Indigo looks amazing and it is an incredible work.