"The Magic Thief" by Sarah Prineas 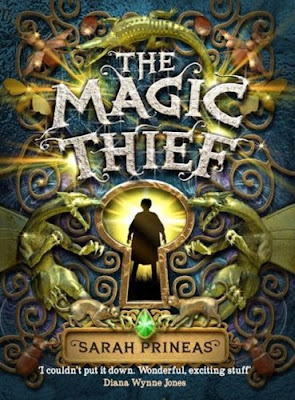 "The Magic Thief"
by Sarah Prineas
Format: Hardcover, 400 pages
Publisher: Quercus Books
Connwaer is a thief of the Twilight, a desolate part of the city of Wellmet, teeming with pickpockets. On the run from the city’s Underlord, Conn steals a banished wizard’s power stone.
Becoming the wizard’s servant and then his apprentice, Conn becomes embroiled in his master’s plan to save the city, whose magic is slowly dying. First he must find his own ‘locus magicalicus’ or power stone, which pulls him closer and closer to the duchess’s palace.Meanwhile, the Wizard, Nevery, is secretly beginning to question Conn’s past: Why did the thief survive in the Twilight for so long and why is he seemingly immune to illness and injury? But Conn is hiding a deeper secret – his connection to the sinister Underlord, Crowe...
Walking the aisles of libraries I like to stop from time to time and look at the children and young adult section. One of the titles that with certainty would have caught my eye if I had seen it there is Sarah Prineas’ “The Magic Thief”.
The story follows a young boy, Connwaer, who in his attempt to steal a wizard’s locus magicalicus (a power stone) ends up as the wizard’s apprentice. With all the honesty I say that I liked Conn, the boy’s short name, and I am certain that if I had read the book when I was a young boy I would have dreamed being like Conn or having an adventure like his. Conn reminded me of Charles Dickens’ orphan heroes and became a likeable character almost at once. Looking beyond his thieving abilities, you can discover a curious, intelligent and brave young man, qualities which many dream having as adults not only as children.
The action of the story and the end are a bit predictable, but that may be because I have a few reading experiences such as this behind. For a young reader it might prove to be a surprise. Still I enjoyed following Conn’s adventures and I found a lot of fun in his relationship with Nevery, the wizard, with Benet, kind of a bodyguard of Nevery, and other characters of the novel. And knowing that Conn will continue to live some adventures in other books I am waiting to follow those as well.
The setting of Sarah Prineas’ novel is very catchy too. Wellmet is an interesting place, a city which runs based on magic and cannot survive without it. The magic will be behind the conflict of the story, but made another of my enjoyments in the reading of “The Magic Thief”. One of the spells that are funny to discover is the Embero spell, one that turns a person in an animal matching his character. At the end of the novel the reader can find a list of runes, this one being the base of the magic spells, and I could find out that the journal pages of Nevery contains some phrases written in these runes and that I could discover using the end list.
In the end I would also like to add that at the pleasure of my reading contributed the drawings of Antonio Javier Caparo which brought me closer to the characters of the novel and the world they inhabit. I believe that an adult can enjoy Sarah Prineas’ “The Magic Thief” while reading it to a child, as much as the child, but I enjoyed reading it for me without any problem.
Posted by Mihai A. at 12:14 PM

I saw this book, I didn't really like the look of it.

I enjoyed quite a lot :)

The second review I have read of this book and both of them have praised this book.

Thanks for not just reviewing the bulk standard adult fantasy!

Jon, thank you. I like going outside the big titles too. And I found a very pleasant read with "The Magic Thief". I have to get the second book of the series which is out already :)

Thanks for the review. I was looking forward to this review and the second book. I've had it on my to read pile.

I like to read children's/ya fantasy between big adult fantasy. I've been contemplating adding some to the blog but didn't know if there was a need or want for it.

Cindy, thank you too. I like reading such books, they offer a different feeling than my usual readings. I think you should add them to the blog, I think that they are needed :)

Mihai, I'm adding this book to my TBR list. I like reading the young adult fantasies as they provide another element of the genre that appeals to young and adult readers.

There are elements that can be found only in children/YA books so it is fun to read them too :)

I have read and enjoyed the first 2 books of the Magic Thief series. In the same line of YA books that can be enjoyed by adults I would recommend you try 100 Cupboards by N.D. Wilson and the second book in that series Dandelion Fire.

Virginie, I wait for my copy of the second book of this series. And thank you very much for the recommendations :)

Thank you for the review, I personally have enjoyed exploring fantasy books and have read many of them. This book is definitely one of the best!

Thank you too. It is indeed a very good book :)