"The Cardinal's Blades" by Pierre Pevel 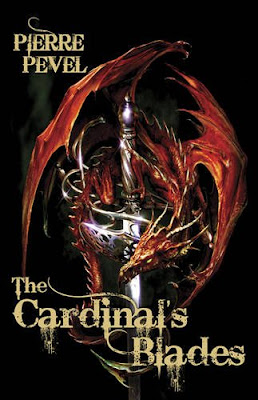 "The Cardinal's Blades"
by Pierre Pevel
Format: Paperback, 384 pages
Publisher: Gollancz
Review copy received through the courtesy of the publisher, Gollancz
Paris, 1633. Louis XIII reigns over France . . . and Cardinal Richelieu governs the country. One of the most dangerous and most powerful men in Europe, Richelieu keeps a constant, sharp eye on the enemies of the Crown to avoid their assassination attempts, thwart their spies and avert their warmongering. But he's up against people who will stop at nothing to achieve their goals, even going so far as to forge alliances with France's oldest and deadliest enemies. Spain, and the Court of Dragons.
The nobility keep tiny dragonnets as pets; royal couriers ride tame wyverns, and lethal man-shaped scaled dracs ropam the country. But the power rising from the Court of Dragons is anything but mundane; the Black Claw sect draws on dragons as they once were: ancient, terrible, utterly merciless . . . and poised to move against France.
Faced with the growing threat from Spain, Richelieu summons Captain la Fargue, an exceptional swordsman, devoted officer and brilliant leader. If he's to turn aside the Black Claw's schemes, La Fargue and his legenday company of swashbucklers and rogues must be persuaded to once again risk their lives, fortunes and reputations for Richelieu, and for France.
It's the biggest challenge yet for The Cardinal's Blades - and they'll need to be sharp . . .
Pierre Pevel is considered one of the best French fantasy authors, publishing seven novels so far and being rewarded with two awards, Grand Prix de l’Imaginaire in 2002 and Prix Imaginales in 2005. “The Cardinal’s Blades” is the first novel in a fantasy series and also the first one to be translated in English.
My childhood and teenage years were fueled with dreams of great adventures, duels and historical and political intrigues in great measure by the wonderful novels of Alexandre Dumas, especially his musketeers’ series of novels. I still enjoy and find comfort in these novels that enriched my reading experience. Through time I fell in love with the fantasy genre and the fantasy fiction became the main source of my readings, but I never forgot the pleasure offered by Alexandre Dumas’ novels. Therefore when Pierre Pevel’s “The Cardinal’s Blades” came along you can imagine how easily reached my soft spot with its blend of historical and fantasy fiction.
The novel is set in the 17th century France and Pierre Pevel manages to capture the atmosphere of the period and makes from the setting an important part of the novel. But this aspect is not the only one that contributes to the atmosphere of “The Cardinal’s Blades”, the reader will find himself deep within political schemes, mysteries and intrigue. The novel left me with a pleasant sensation that each chapter reveals as much as casts a new shroud of mystery on the plot, the final chapter as its peak, resolving the novel’s plot but unveiling a new enigma that leaves the series on the edge and prepares the second novel. And that is not all, the novel is full of action, fighting scenes come in no small amount and the fans of swashbuckling adventures will not be disappointed. However, the novel is a blend of historical and fantasy fiction, but the fantasy elements of “The Cardinal’s Blades” are rather scarce. There is the presence of the dragons in their different forms and they play a role within the story, but that role is rather small and their presence weak. Therefore the novel feels much more like a historical adventure.
The beginning of the novel, almost half of it actually, can be a bit confusing. Pierre Pevel introduces a great number of characters in the beginning chapters and I lost track for a few times of them until I got used to every single character and his place in the story. From the half way forward though the plot takes charge and everything about the novel’s character will be clearer (except the mysteries surrounding them and imposed by the story). There are quite a range of characters as well, with different personalities and attitudes. I liked some of the characters more than others, but I have to say that none of them are developed in the fullest. I believe that because of the presence of so many characters there is no room left for none of them to truly develop and therefore every single one of them will suffer of a lack of depth in their characterization. Still, I was sympathetic with a few of them.
As an avid reader and an admirer of the Alexandre Dumas’ works I found in “The Cardinal’s Blades” a novel very much on my liking. Although the fantasy elements are rarely seen the Pierre Pevel’s novel offers a fast moving story, full of action, intrigue and swashbuckling adventures.
Posted by Mihai A. at 12:02 PM