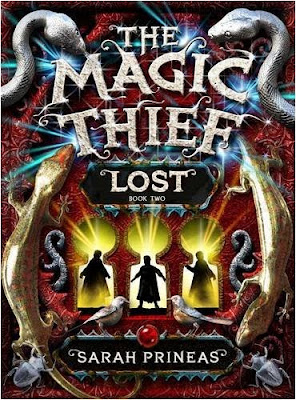 "The Magic Thief: Lost"
by Sarah Prineas
Format: Hardcover, 432 pages
Publisher: Quercus Publishing
The review is based on a bought copy of the book.
Conn's quest to save his city's magic has become urgent: his power stone is lost and Shadowmen, ruthless assassins, are stalking the city's people. But when Conn blows up Wizard Nevery's beloved home, he is banished by his own master. Determined to return and save Wellmet, he travels to Desh, a glittering city in the desert, home to the Shadowmen and run by a mysterious Sorcerer-King...
I returned a bit this year to my childhood years with the reading of the children’s novel with which Sarah Prineas made her debut, “The Magic Thief”. Now my memory time travelling was continued with the second novel of the series, “The Magic Thief: Lost”.
I’ll start my review by saying that for the readers unfamiliar with the first novel it is better to start with “The Magic Thief”, because “The Magic Thief: Lost” holds many threads linked with the first novel of the series. But for those who read and enjoyed the previous novel “The Magic Thief: Lost” offers a return to the familiar setting and characters. Obviously, in the center of the story I found Connwaer, the young pickpocket thief who became a wizard’s apprentice and who discovers a new link with the magic. Conn begins a new journey in this novel, a bit darker and dangerous than the previous one, and with deeper connections within the first story. So, the story line becomes more complex, but with it the Conn’s character becomes stronger. It is true that Conn is quieter than in “The Magic Thief”, but he remains the same fresh character and his emotions reach new limits.
With Conn I found his old friends, Nevery, Benet and Rowan, but this time Nevery and Benet play a smaller part and they are only scarcely present. Still Nevery remains the same grumpy and beautifully shaped wizard, while Benet is still the same quiet bodyguard with a few surprising but amusing preoccupations. However, the magic doesn’t suffer a downfall and the child in me, and not only him, was fully satisfied by it. Once again Sarah Prineas brings the magic language into play, making from this a very interesting and attractive aspect. There are a few more spells found in “The Magic Thief: Lost”, but I was glad to find again the Embero spell. And this time it offered a different outcome, but as pleasant as the first time I’ve seen it.
As I said the story becomes a bit more complex and although the first half of the novel seems a bit slow Sarah Prineas kicks the things into motion in the second half and the novel benefits from more action. Further on, the world of “The Magic Thief” books becomes wider, the reader stepping outside the main setting of the first novel, Wellmet, and travelling to new locations. Also a new negative character enters the scene, who proves to be more challenging for Conn and who is darker and more cruel than the previous ones (with a particular scene that I find to be too violent and vicious for children).
I really enjoyed “The Magic Thief” and I am happy to say that I found “The Magic Thief: Lost” to be even better than its predecessor. Sarah Prineas wrote a novel that I would have loved if I have read it in my childhood, but which I truly enjoyed as much as an adult too. It remains only to see what adventures await Conn in the next novel.
Posted by Mihai A. at 12:15 PM