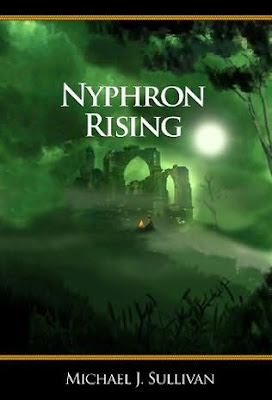 "Nyphron Rising"
by Michael J. Sullivan
Format: Paperback, 362 pages
Publisher: Ridan Publishing
Review copy received through the courtesy of the authors' publicity agent, Robin Sullivan
A puppet is crowned. The true heir remains hidden. A rogue's secret could change everything.
War has come to Melengar. To save her kingdom, Princess Arista runs a desperate gamble when she defies her brother and hires Royce and Hadrian for a dangerous mission.
As the power of the Nyphron Empire grows, so does Royce's suspicion that the wizard Esrahaddon is using the thieves as pawns in his own game. To find the truth, he must unravel the secret of Hadrian's past…what he discovers could change the future for all of Elan.
When it comes to the titles that most probably I would have missed if it weren’t for the access to information offered by the Internet, Michael J. Sullivan’s novels would be in one of the top spots of the list. “Nyphron Rising” is the third novel of “The Riyria Revelations”, and with it, the series reaches its half way point.
The first two novels in “The Riyria Revelations” series came as a totally unexpected and very pleasant surprise, but that is not the case with the third novel, “Nyphron Rising”, because after reading “The Crown Conspiracy” and “Avempartha” I already established personal expectations for the Michael J. Sullivan’s works. “Nyphron Rising” rises to those standards and made me travel with joy once again into the fantastic world built by the author, the world of Elan. I discovered, with pleasure, familiar places and characters, but also new ones and a few unanticipated twists and turns.
One of my greatest delights when reading fantasy novels is the world building process and the discovery of the worlds imagined and born from the authors’ pens. Although Michael J. Sullivan doesn’t spend so much time in the world building process compared with the more extended fantasy works his world has a clear shape and is a vivid one. In “Nyphron Rising” the world of Elan develops further on, reaching new limits and dimensions. Local and imperial politics play a more important role in the novel and this makes the world of Elan even more interesting and captivating. However, a wider and an obvious evolution can be seen in the main characters of the novel, and of the series, Hadrian Blackwater and Royce Melborn. The novel offered me another meeting with the two characters, feeling very much like a meeting with old friends, also offering me a new image of the characters, a deeper insight of their past and personalities.
The story of “Nyphron Rising”, as those of the previous novels, comes with a page-turner adventure, with quite a lot of action, amusing dialogues and situations, with tension, intrigue and a few twists on its side. Still, although the story of the novel is resolved within its pages, in my opinion “Nyphron Rising” doesn’t stand as much on its own. It is true that a reader can find enjoyment on the novel, but there are several parts and aspects that leave those unfamiliar with “The Crown Conspiracy” and “Avempartha” clueless about them. So, I believe that although the first two novels can be enjoyed very much on their own “Nyphron Rising” works much better if the reader explored the same two novels. “Nyphron Rising” continues to work on the general plot of the series and therefore it brings a slowing in the pace set by the first two novels and preparing it for the conclusion that awaits it in the next novels of the series. I have to say that compared with its predecessors this novel feels a bit weaker, but it offers a pleasant reading nonetheless. I also have a small issue with it, in particular with a recovery of a character after a heavy flailing that occurs too fast in my opinion and for my liking.
Michael J. Sullivan is not a surprise for me anymore, but an author that already established his place within the fantasy genre. “Nyphron Rising”, like Sullivan’s previous novels, offers an adventurous tale and a captivating story, returning to the roots and values of the classical fantasy.
Posted by Mihai A. at 12:33 PM

Good review! It seems you like the series. Book one and two are on my to buy list for May 2010.

When everything goes well the fourth book in the series - The Emerald Storm - will be released in April 2010 and the fifth book - Wintertide - will be available in October 2010.
For the final book - Percepliquis - you have to wait until 2011.

Glad you liked this series Mihai! I agree that it's great!

Series books should contain enough information in them for readers who are not familiar with the characters to acquire the proper gist of the story. It only requires a line, at best, to set the reader's understnding. Despite your concerns over the hidden knowledge with respect to some of the characters, I'm looking at adding this series to my season wish list.

Michael, I am looking forward to see how this series concludes. And I recommend you to read it, it is a very good one :)

Ben, I really like it and I believe that deserves a wider coverage :)

Barbara, it has those bits of information, but there are a few threads that needs the reading of the first two novels :)

Thanks for reminding me that I want to get my hands on this series!

I warmly recommend it :)

I began reading this series shortly after "Crown" was released and have eagerly anticipated the publication of each subsequent adventure. I was drawn to the stories because the fantasy world Sullivan creates is not overly complicated. (Actually, I had sworn off the fantasy genre --except for Harry Potter-- long ago because I hated the drawn-out descriptions of the worlds that, even after many pages of explanation, were still too complicated to remember without referencing back.) I stuck with the series because the characters are complex and entertaining, the settings (at least in my mind) are beautiful, and the story lines are compelling.

If you have been on the fence about starting the Riyria Revelations and entering the world of Elan, I urge you to begin now. DO IT! YOU KNOW YOU WANT TO! Get thee to Sullivan's website (http://www.michaelsullivan-author.com/) and order your copies today! You'll be so happy you did!

I have to say that I like complex worlds and I am very attracted by world-bulding. Michael Sullivan's world has its complexity, but the story and the characters are indeed the strongest points. I am looking forward to the series conclusion :)