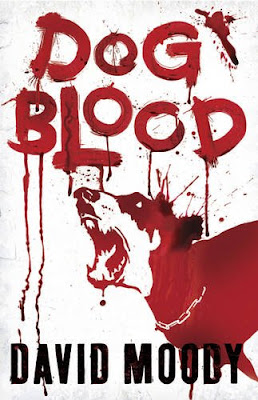 The end of the year is almost knocking on the door and as always December is very much a month of looking in retrospective, but also a month of looking with hope into the future. I am not writing my top of the year book list already, but I am certainly working on the shopping list for the next year (although I think I’ve started working on it from the beginning of this year). Balancing the both sides I have to say though that one of this year’s titles that with certainty will be present in my end of the year top is David Moody’s “Hater” and this makes me look forward to his next novel in the Hater series, “Dog Blood”, which will be released by Gollancz next year in June, if I am not mistaken. But until then I have to wonder what David Moody has in store for his story looking over the cover and the synopsis of “Dog Blood”.
The world has suffered a catastrophe of unknown cause, dividing humankind into two: the Haters and the Unchanged. Each group believes the other to be the enemy; each group is fighting for survival. Only by working together can the enemy – whoever that enemy is – be defeated. There are no other choices. Danny McCoyne has managed to break free, and after days of indiscriminate fighting and killing, he is determined to make his way home, to recalim the only thing of any value to him in this strange new world: his daughter Ellis. Unlike his wife and son, Ellis is like him, and he knows, in his heart of hearts, that she is not dead. His dearest wish is for Ellis to be fighting for the world at his side – but Danny soon discovers his daughter is worth far more than just another fighting body. Others like him have discovered that children are absolutely vital to the cause. They are strong, small, fast, and they have no inhibitions. They are pure Haters…
Posted by Mihai A. at 12:28 PM

I haven't even gotten around to Hater yet, and there's already a sequel. Looks darned good, though.

Looks very good. And I recommend "Hater" because it is a very good book :)

i read "Hater" very good book. i want to know what happens so bad. can you tell me when is "Dog Blodd" coming out?