"The Inferior" by Peadar Ó Guilín 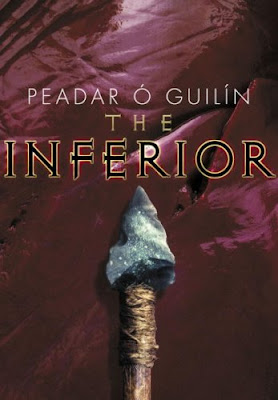 "The Inferior"
by Peadar Ó Guilín
Format: Hardback, 448 pages
Publisher: David Fickling Books
The debut novel of Peadar Ó Guilín, "The Inferior", received many positive reviews since the publication so I was very curious about his book. And I will start by saying that all those reviews are well deserved.
A Tribe of humans has to hunt on an almost every day basis to feed all his members, and if the hunters are not active than the only way to keep the food supply is by trading with the species which have a pact with the humans. When it comes to trading the weaker members of the Tribe have to "Volunteer" so that the exchange might provide food to their families. Stopmouth, a member of the Tribe, is considered disabled by the other humans because of his stuttering, but he is considered a valuable hunter too. Gone to hunt one day he sees one of the Globes that fly on the Roof of his world explode and a strange human falls from the sky. From here the entire Stopmouth's life is changing. Betrayed by his brother he has to flee along with Indrani, the woman which fell from the Globe, and Rockface, his friend.
Peadar Ó Guilín's novel is a captivating one. It has a lot of action which held me from the beginning and didn't release me until the end. Life in the Tribe is a constant battle for survival and the events surrounding the Tribe and the main character, Stopmouth, occur in a rapid succession. The author manages to properly tie the chain of events so the storyline is constantly developing.
I really like how Peadar Ó Guilín used the language. Stopmouth, Rockface and the other humans from the Tribe sound simple like their way of living. You can see this simple behavior in the names used by the humans to call themselves, the other species or the places they know. I really liked some expressions created by the author and used by the characters, for example "he still had a thousand days in him" (he still had years to live) or "jump the fire with me" (marry me), and of this expressions you are able to see how the author used the language in his characters creation. I really liked the main characters too. Stopmouth is well build and he made me care for him and follow his adventures with great interest. He is not a hero in the classical way and his feelings and fears make him more human and much closer to the reader. Rockface, Indrani and Wallbreaker are interesting and well build also.
The world-building is good. Although it leaves me wondering about its background, I easily overcome this minor issue. That is because the world is reach, besides the humans it is populated by many other interesting species. And here the author does a great job too, each race having his own characteristics, his own way of fight and hunt and his own behavior. The species range from the weaker ones, like Flim, to the most vicious ones, like Longtongues and Diggers. Also my minor issue with the world-building is easily overcome considering that "The Inferior" is the first novel in a trilogy and I believe that the author will develop further this world.
"The Inferior" is a great, interesting and enjoyable read, which I really loved. The bad part is that, it is putting my patience to a test, because I can't wait to read the next novels in the series.
Posted by Mihai A. at 10:50 AM

I'm glad you enjoyed the The Inferior as well; thanks for the link.

You're welcome Uros :) You have a very good review of the novel.