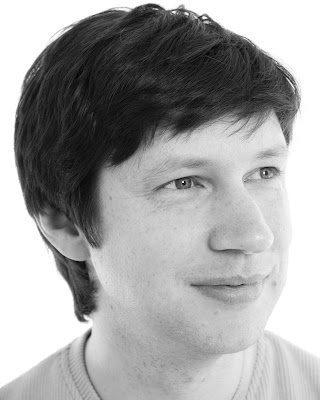 Peadar Ó Guilín is the author of the several short stories published in magazines, e-zines and anthologies like "Adventures in Swords and Sorcery", "Black Gate", "Walk on the Dark Side" and "Weird Tales: The 21st Century, Volume 1". He published his first novel, the excellent "The Inferior", in September last year. Peadar Ó Guilín was very kind to answer my questions for the following interview.
Dark Wolf: Hi Peadar, thank you very much for taking the time to answer my questions.

Considering the many notions present in your novel, "The Inferior" and the presentation made on the cover that the novel has echoes of Tarzan, Conan and the Truman Show can you tell us, please, where did the idea for your book come from?
Peadar Ó Guilín: Oh, bits of it come from all over the place, I'm sure. But the seed was planted many years ago during a strange dream I had. A number of creatures were hunting me for food and I knew - in the way you always "know" things in dreams - that if I managed to catch one of them, I could eat it instead.
Dark Wolf: As a reader do you enjoy the same genre as those you prefer as a writer? What are the works and the authors which you enjoy? Did anyone in particular influence your work?
Peadar Ó Guilín: I grew up as a fanatical reader of Science Fiction and Fantasy. "The Hobbit" was the first book to really light a spark in me, but there were a great many other authors I enjoyed. At school, my favorite was Harry Harrison, especially his "Death World" books. I loved Bob Shaw too. And yet, if you were to pick one influence on "The Inferior" that is stronger than all the others, it would probably have to be the writings of Brian Aldiss. It certainly wasn't intentional on my part, but looking at the world I made, echoes of "Hothouse" and "Helliconia" are everywhere to be found.
These days, my favorite authors are people like George R.R. Martin, Neal Stephenson and R. Scott Bakker, but the influences on my writing still seem to derive more from the books I read as a teen.
DW: I’ve seen that you had some short fictions written, but which one is your favorite, the short fiction or the long one?
PÓG: I like them both pretty much equally. However, it has to be said that if you want to make a living out of fiction, you'd better be writing novels. Even so-called professional pay rates for shorter works would leave you feeding your family on boiled-grass soup.
But knowing this didn't stop me writing short stories. I always thought that their quicker turnaround times would make them an ideal tool for learning to write and I think it worked, at least for me.
Among the many lessons learned was the fact that it's not good enough to send off a manuscript that isn't as perfect as you can make it. I'm a lazy sod and it took me dozens of magazine rejections to fully grasp that point.
When you're writing and rewriting a novel, you can become very needy. You're desperate for somebody to validate all the hard work you've put into it as soon as possible and it's hard to overcome the temptation to submit it while it's still too raw for an editor to digest. My whole short-story education gave me the strength to avoid that mistake.
DW: Considering that the fantasy genre starts so many controversies and the fact that “The Inferior” has many fantasy elements, do you think that this genre of literature is underappreciated?
PÓG: To be honest, I don't care about these controversies. My goal is to have my readers love my books; to become, some day, their favorite author. I also want to make a living doing my dream job. I want to go to conventions and make friends with people who speak my language. Beyond that, I'm not too worried about so-called mainstream recognition. I'm having fun.

DW: In your novel the communication between races can be a problem. But in real world the humans regardless of their origins can find a common point, one being the literature. How do you feel knowing that your novel travels the world and is read in different countries?
PÓG: It feels pretty amazing. I'm looking forward to seeing "The Inferior" appear in Russian, Japanese and Korean. It's the whole 'alien' alphabet thing :-)
DW: I’ve seen that you are a constant presence on the Internet, on forums, blogs, websites etc. Do you think that in a fantastic scenario that mankind can adapt to a way of life that resembles the one from “The Inferior”?
PÓG: Well, in a way, that's what the book is all about. Could we adapt? How far would we have to sink in order to survive? You've seen my answers to that in the events that occur in the novel, but as for the moral implications of hunting sentient aliens for food, I can only provide more questions.
DW: The characters of your novel are almost exclusively carnivores. Do you prefer meat or vegetables?
PÓG: An interesting question. I eat both, but I do wonder if it's justifiable to be carnivorous in this day and age.
DW: I really liked the variety of species in your novel; do you plan to develop one of them in particular or to introduce new ones?
PÓG: I have to be careful about spoilers here. But it's likely there will be a bit of both.
DW: Your novel is marked as Young Adult but has many harsh scenes of

hunting, of cannibalism. Would you recommend your book to young readers or to the older ones?
PÓG: I would recommend it to anybody who is ready for it. The 14 year old Peadar would have absolutely loved this book - I know that much. I've also had mail from plenty of young readers who feel the same.
On the other hand, I've come across a few adults who were turned off by the horror of the situation. Maybe they understood the implications of it more fully than the younger readers and were appalled by it.
DW: Did the publication of “The Inferior” change your life?
PÓG: Yes. It paid for the deposit on my house. I'd never have been able to afford that otherwise. It allowed me to work part time so that I could dedicate two days a week to writing.
DW: I know that you said that “The Bone World” almost certainly will be a trilogy. Can you reveal us something from the future two novels of your trilogy?
PÓG: I'm afraid not, although there's been a lot of very perceptive speculation on certain web-sites. What I can say, is that I haven't forgotten about Wallbreaker.
DW: Have you thought about what you’re going to do after the publication of “The Bone World Trilogy”? Do you plan to write something else?
PÓG: Oh yes. I want to be writing for the rest of my life. Even then, I suspect I'll die with a drawer full of unused ideas.
Thank you very much Peadar for your time, your answers and your amiability.
Thank you :-)
Posted by Mihai A. at 12:55 PM

I enjoyed doing it, thank you, Chris :)