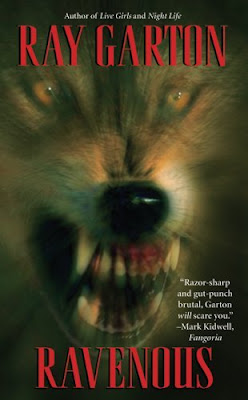 "Ravenous"
by Ray Garton
Format: Paperback, 342 pages
Publisher: Leisure Fiction
Ray Garton has more than 20 novels published and he was nominated for the Bram Stoker award in 1988, for his novel "Live Girls". "Ravenous" is my first intersection with Ray Garton's works.
The Californian town Big Rock has a problem with a serial rapist. When Emily Crane, a local police receptionist, is raped by a half-human being and she kills him, the town's problem is not solved, but it's getting worse. Although Emily Crane kills her attacker, the sheriff Arlin Hurley sees him walking out from the morgue. After that the madness is starting and Sheriff Hurley will be surprised to find out that his town has a werewolf's infestation.
Ray Garton steps outside the werewolves stories boundaries. He depicts them in a different light, picturing his werewolves not as a lonely and unfortunate human, but as a pack of savage and soulless beasts. Also in Garton's novel the lycanthropy is not transmitted through bite as usual in this kind of stories, but is rather a sexual transmitted disease.
The pace of the novel is pretty good, although "Ravenous" starts and ends in a fast pace, but throughout the novel it slows down. The characters are rather flat, missing an in depth description and they doesn't attract too much. Daniel Fargo, the werewolf hunter, is also a common figure and it reminds me too much of Van Helsing. On the other hand, the community of Big Rock is well build, with realistic problems and activities. The end of the novel has an illogical situation in my opinion, but I will not get into details because in that case I will spoil your read.
Sometimes all the action of the novel seems only an excuse for sex scenes. Don't get me wrong, I don't have a problem with sex scenes, I know that this scenes are an important part of modern novels and I remember that in my school days we had a book at the library that had hints of a sexual scene and everybody read that part, so when the book was opened it opened at that exact page because of the multiple use. Like I said in "Ravenous" lycanthropy is a sexual transmitted disease but the sex scenes are too many and some of them without an obvious relevance to the story.
"Ravenous" despite his flaws is a fun horror read that you can take in vacations or at the beach and Ray Garton has the merit of coming up with new ideas in werewolves stories.
Posted by Mihai A. at 9:53 AM