"The Shadow of the Wind" by Carlos Ruiz Zafón 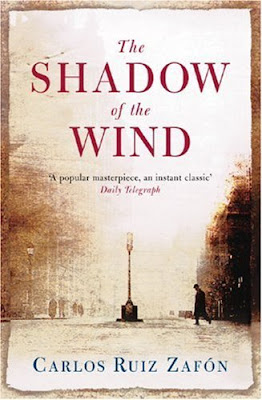 "The Shadow of the Wind"
by Carlos Ruiz Zafón
Format: Paperback, 512 pages
Publishers: Orion
"The Shadow of the Wind" by Carlos Ruiz Zafón is fantasy. "The Shadow of the Wind" is horror. It is mystery, it is romance and above all it is absolutely lovely.
Mister Sempere, a librarian from Barcelona, takes his son, Daniel, to the Cemetery of Forgotten Books. Here, Daniel finds all the books in the world, which are forgotten and abandoned. Daniel has to adopt a book from the library and has to take care of it. He chooses “The Shadow of the Wind” by an unknown author, Julián Carax. But after his visit to the Cemetery of Forgotten Books, Daniel finds out that a lot of people are in search for his adopted book. And from here he embarks in an adventure of a lifetime.
When I sat in front of my PC to write the review for Carlos Ruiz Zafón’s “The Shadow of the Wind” I thought that it will be the easiest I’ve written so far, but it proved to the most difficult one. The novel is a rollercoaster of emotions. If I remember exactly, I think that are about 8 years since a book made me cry, but this novel did that. Carlos Ruiz Zafón took me by the hand and showed me his museum of human emotions. In my journey in meeting his characters and their emotions, I’ve cried along with them, I’ve despair, I tasted bitterness, I laughed, I hoped, I dreamed with them. Sometimes the novel had such sadness that I was afraid that can be infectious, but I could find the treatment through the pages of the novel.
The characters of “The Shadow of the Wind” are great. They are very well made and seem real. When I read the novel, I’ve had moments when it seemed like the characters had stepped down from the pages of the novel and stood beside me, telling me their story. Every single character, major or minor, has his own story, a story that can make a new novel all on its own. I enjoyed the main character, the young Daniel, because sometimes I could identify him with me. In equal measure I enjoyed Fermín Romero de Torres, one of the best characters that I encountered in my reading. He is so complex and simple altogether, he is funny, he is serious and he is unique. He is an absolutely delicious character.
The story made by Carlos Ruiz Zafón is beautiful. He builds it with care, the story grows and took me in her depths. And when I believed that I could figure the entire mystery the author twists the story and gives the reader a completely new element that changes its course, until one point of the novel that stunned me and blew my mind in surprise. I can’t talk too much about the language used by the author, because I read a translation in Romanian of the original novel, but I’m convinced that the original descriptions and language is as good (if not better) as the Romanian version. The ironies and the humor made me burst into laughter and the descriptions made me see the images as if they were real.
And all these are written on the background of Barcelona. The city of Barcelona is described marvelously and as I read the novel it gave me the sensation that I saw a postcard, a moving postcard, of Barcelona in the 40s and 50s. In “The Shadow of the Wind” I could see a gothic Barcelona, with rainy, misty and even snowy days. I could see a Barcelona hurt by the Civil War and which tries to recover from the wounds made by war. I could see the author’s love for Barcelona and as Fermín says:
“This city is a witch, you know, Daniel? It creeps under your skin and steals your soul without your notice.”
I’ve been to Barcelona and I can testify that this affirmation is quite true. And this novel deepened my love for this great city.
“The Shadow of the Wind” by Carlos Ruiz Zafón is a breathtaking read. I picked up the book and after that with difficulty I put it down until the end. It made me want to see Barcelona again, it made me want to read more works of Carlos Ruiz Zafón and it climbed up dizzily in my personal favorite list.
Posted by Mihai A. at 11:16 AM

Great review! This sounds like a book definitely up my alley. I'm going to put it on my "to buy" list. Thanks!

Very good review! This sounds very good; I'll have to see if I can find it.

Glad you enjoyed it, Mihai! Don't know when El Juego del Ángel will be out in Romanian (mid-2009 for the English translation), but I found it to be even better than La Sombra del Viento.

I wonder if I can get you hooked on the Chilean writer Roberto Bolaño's writings...

Thank you very much, Paul and Kristen :)

Don't start with me, Larry. I'm already very interested in the prequel and if you tease me... ;)
I've read tha Roberto Bolano's rights were sold in Romania, so I think that will have his books translated soon. But I'll make more digging after them. Thanks :)

I picked up "The Shadow of the Wind" a while ago but never read it. Maybe I will now after reading your great review!

i agree with the above comments - lovely review; the last time I read an emotional and heartfelt book was The Road by Cormac McCarthy (you should read it, if you haven't yet)

Thank you very much, Uros. And thank you for the recommendation :)

Grrr... you're making it very hard to hold of on reading this until my trip in September!

~Aidan
A Dribble of Ink

Aidan, I would recommend to read it sooner if you can. It is a great book :)

I need to pay more attention -- great review! :) I loved this book (not for review, just for me) and I can't wait until more are translated.

I'm going to have to find out more about that Roberto Bolano, as well!

Chris I love it too just for me, I have a Romanian edition. And I wait for "El Juego del Angel" which will appear in Romania at the beginning of the next year :)

Indeed a wonderful book. I read just before reading Blindness by José Saramago (Nobel Prize) and if you haven't, read it too (although the 2 books have nothing in common !)

Saramago is an interesting author, although I haven't read "Blindness". Thank you for recommendation :)

I finally read it. All I can say is: Wow! It's absolutely amazing! I'm not sure I can read for a few days after reading that!

I know the feeling :) For a while I couldn't read either ;)

My dad recommended this book to me..
There was only one copy left in the book store I went to! It was fate! haha the book was suppose ot be mine. :D
Great review. And I definitely agree with you :)
I can't find the words to descirbe this book. Amazing is an understatement. :)

Kai, you are right amazing is not even close. And I am still having difficulties describing it :)

As you could see the author's love for Barcelona, I can see your love of this book! I can't wait to read it.

Dreamybee, I really love this book :) I hope you'll enjoy it soon.