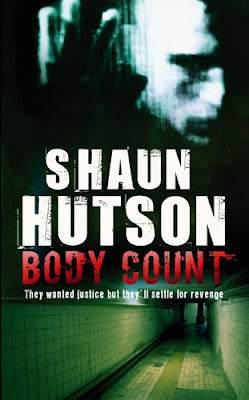 "Body Count"
by Shaun Hutson
Format: Hardcover, 384 pages
Publisher: Orbit Books UK
Shaun Hutson is a well known name in the horror literature, but my encounters with his works are scarce. Still, when I had the opportunity to read his latest novel, “Body Count”, I jumped at it.
Detective Inspector Joe Chapman and his team have to deal with another case, a series of murders made in a hunting game and into snuff movies posted on the Internet. But they are clueless and seem not to break the case. And Joe Chapman has to add to his working frustration another one from his personal life, his daughter ran away from home. However, a twist in his life will bring his problems to a new level.
The novel starts in full flight, with a scene seen through the eyes of a victim. And after this initial scene the pace doesn’t slow down, on the contrary it picks a faster rhythm. “Body Count” kept me hooked in its action scenes, scenes that are present almost in every chapter. The novel is structured in short chapters and this adds to the pace keeping the reader caught in the plot. The action scenes are punctuated by gore and carnage, described closely to the smaller details and that might not be on everyone likings. But Shaun Hutson made the horror fan in me enjoy this gory scenes the most.
Also described closely to the smaller details are the weapons, but that didn’t work for me that well. I mean that knowing a weapon and ammunition caliber is all right, but to keep reminding the caliber or going to the details of speed or range too often can turn off a reader from that particular scene. Another thing that didn’t sit well with me is the fact that some situations use clichés present in action movies and a few scenes are built as seen in those movies. However, these aspects are not used in excess and I could pass the inconveniences focusing on the plot and the action pace of the novel. What also helped me pass the inconveniences are the twists and turns of some situations. Although on some scenes I predicted an outcome the author came with a turn that was unexpected.
When it comes to the characters of “Body Count” I have to say I felt rather neutral to them. They are built through the interaction with each other and through the immediate situations they face. But I have to ask myself if a more in-depth building of a character wouldn’t have faltered the steadily rising pace. The main figure is Joe Chapman, a policeman who doesn’t fit the general pattern of this type of characters. Shaun Hutson uses throughout the novel almost exclusively his last name and that didn’t help me either to connect to the character. But with Joe Chapman the author brings forth a few moral issues and a few interesting situations in which a man’s reactions would be hard to predict.
I believe that “Body Count” beside the gore and carnage present in its pages can work very well as high-paced thriller and I have to admit that Shaun Hutson’s novel was an entertaining and fun read for me.
Posted by Mihai A. at 11:32 AM

Thank you very much, you are the most kind, Barbara :)

Sorry I didn't comment sooner Mihai I somehow missed your review. Used to be a regular Shaun Hutson reader but have missed the last few, sound like I may have to catch up with this one :-)

Colin, it is an enjoyable read and I had fun with this novel :)