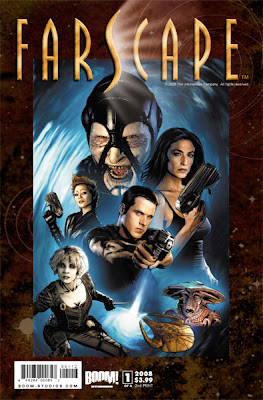 FARSCAPE #1 GETS SECOND PRINTING
First Printing Saw Sell Out In 5 Days
Near Universal Critical Acclaim
BOOM! Studios announced today that after selling out in five days, FARSCAPE #1 will be receiving a second printing. The second print will have a slightly altered cover to distinguish itself from the first printing.
Diamond Comics Distributors will make the second printing of FARSCAPE #1 available on January 14th, at that time the second printing's code will open for orders, and a Diamond Daily article will also run that day alerting retailers to its availability.
FARSCAPE #1 second print has a tentative street date of February 4th.
"All of us involved with the Farscape comic books are ecstatic that the fans have embraced the project in such an overwhelming way," said BOOM!'s Managing Editor Matt Gagnon. " I couldn't be happier with the team we have in place. We're having a blast continuing the Farscape mythos, and we hope it shows."
FARSCAPE #1 is written by television series creator Rockne S. O'Bannon with script by Keith R.A. DeCandido, interior art by Tommy Patterson and cover art by fan-favorites Dennis Calero and Joseph Corroney!
Picking up directly where the television miniseries FARSCAPE: THE PEACEKEEPER WARS left off, fans can look forward to show creator O'Bannon steering their favorite characters into new and original stories, keeping with the existing canon - and then extending it!
Since the release of FARSCAPE #1, critics across the internet have raved:
"...a must-read..." - Newsarama
"...This is the best comic of a TV show ever done..." - Comics And...
"Every word and panel could be shot for a FARSCAPE episode... it's a great to day to be a FARSCAPE fan." - Weekly Comic Book Review
"FARSCAPE is probably the best TV series made into comics I have seen so far." - Independent Comics Site
"Fans of the TV series should rejoice ..." - Broken Frontier
"...FARSCAPE #1 is everything that made FARSCAPE a cult hit and fan favorite, successfully translated to a new medium." - Watch Farscape
"There's action, sex, exposition, and a bit of humor... Pretty much everything you want in a FARSCAPE episode. Color me happy." - Comixtreme
"...the scenes definitely ring true to the show, even some four years later." - Comic Book Resources
"...for those of you who weren't FARSCAPE fans during the TV series run and don't understand what the buzz is about, this is a perfect opportunity to jump in!" - Comic Related
"It's good. Very good... Strongly recommended." - Dave's Rants
Debuting on the SCI-FI Channel in 1998, FARSCAPE follows the adventures of astronaut John Crichton, who has a freak accident during an experimental space mission that catapults him across a thousand galaxies to an alien battlefield. Suddenly, he's trapped among alien creatures wielding deadly technology - a battle that 20th century sci-fi pop culture never prepared him for. Hunted by a merciless military race, Crichton begins his quest for home from a distant galaxy.
A groundbreaking award-winning sci-fi production, FARSCAPE from The Jim Henson Company and [HALLMARK] has become a global favorite. Named by TV Guide as one of television's "Best Cult Shows Ever" and most recently named by EMPIRE Magazine as one of the "50 Greatest TV Shows of All Time," FARSCAPE is known for the overwhelming fan-based campaign that led to its miniseries production. The show has continued to find new audiences as it airs in syndication and is available on iTunes and DVD.
About BOOM! Studios
BOOM! Studios (http://www.boom-studios.com/) is a unique new publishing house specializing in high-profile projects across a wide variety of different genres from some of the industry's biggest talents. In its inaugural year, Wizard Magazine named BOOM! "Best New Publisher." Founded by the creator of the TV show EUREKA, Andrew Cosby, and his partner Ross Richie, BOOM! Studios continues to be on the leading edge of comic and graphic novel publishing.
Posted by Mihai A. at 12:28 PM

I've start looking for the DVDs as well :)