"The Secret History of Moscow" by Ekaterina Sedia 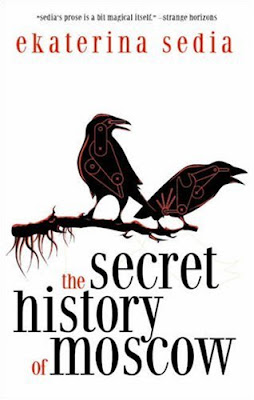 "The Secret History of Moscow"
by Ekaterina Sedia
Format: Paperback, 304 pages
Publisher: Prime Books
Ekaterina Sedia made her debut with the novel “According to Crow” and “The Secret History of Moscow” is her second novel, one set as the title says in the author’s city of birth, Moscow.
Galina lives in Moscow with her mother and her pregnant sister, Masha. When Masha gives birth to a baby boy in their apartment bathroom and mysteriously disappears Galina believes that her sister transformed in the jackdaw which seats at the bathroom window. But Galina was hospitalize for schizophrenia and she hesitates to share her believe with anyone. Instead she begins the quest to find her sister, a quest that leads her on the underground of Moscow together with her new acquaintances Fyodor, a street artist, and Yakov, a policeman.
Among the stories I grew up with I was delighted by quite a great number of Russian fairytales and now Ekaterina Sedia through her novel, “The Secret History of Moscow”, made me remember those wonderful stories. In her novel Ekaterina Sedia brings to life some of the characters of the Russian folklore and legends, some historical characters and creates a few characters of our modern times, with the problems of the modern society and of the historical changes suffered by the Eastern European countries.
The main characters of the novel are three misfits, each one of them with a sad story behind, but who seem to find their places in their unique stories and on the underground of Moscow. Ekaterina Sedia works masterfully on her characters and this applies not only to the main three characters, but to the other ones as well. Through the interaction and the conversations between the three main characters and the denizens of the underground Moscow the author introduces the reader to the stories of each character and to their more or less tragic destiny. Also through their stories the author takes the reader through different periods of the Moscow history and to some of the major events of this history.
Besides the moments of history presented by Ekaterina Sedia she builds a wide picture of modern Moscow and the city situation after the fall of USSR and of the European communist bloc. I could connect with many aspects of Moscow present situation, because my country passed and still passes many of the same situations described by the author. The atmosphere created by the author is a grim one, but it is a captivating atmosphere. And the mix of history and mythology of the past Moscow adds new elements to the created atmosphere and to the pleasure of reading.
Although the story seems to falter from time to time and to be overpowered by the character presentation on some places it is an original and attractive story. Adding some amusing situation and replicas in the story (my favorite one being that when Father Frost says: “Have you dum-dums ever noticed that the moment there’s a foreign invasion, you get a record cold winter?”) I was attracted by Ekaterina Sedia’s “The Secret History of Moscow” since the beginning and the novel introduced me to an author I’ll be watching in the future.
Posted by Mihai A. at 11:35 AM

hmm...like i said i`m very curios about "The Alchemy of Stone"...the fragment from Weird Tales magazine reminded me of the freshness that i econtered in the Perdido Street novel...and yes, i guess that she being a writer from Russia, we the est-europeans can find more links to our culture and way of life...
she`s indeed a writer to watch ...

I found it promising. So I bought the book and read it.
To be honest I never got in the book.
I always felt like a distant viewer.
I also didn't like the Ekaterina Sedia's style.
For me THE ALCHEMY OF STONE is a far better book.

I think there is also some influence from the background of the reader.
A life in Romania differs from a life in Germany.

Anyway in the end it is a question of like and dislike.

And to be honest it would be a humdrum world when everybody likes the same.

Now I'm really interested in the next book of Ekaterina Sedia.

Finally let me say this is a good review.

I liked the review, and I'm putting this on my TBR list to check out when I get to the bookstore. An author living in a country far from me will have their own slant on situations, something I'm keen to learn about.

Mihai, thank you for the instructions.

Bogdan, I should get to "The Alchemy of Stone" soon. And in this novel I could relate to the general situation after the Communism fall. It has a few different aspects, but a lot more that look the same :)

Michael, thank you very much :)
It is possible for me to feel more involved in the story because of me being close to Russia, but I enjoyed the story as well. And you are absolutely right, if all of us will be the same it is no fun :)

Barbara, I hope you'll like it. And I'm glad that I could help :)

I wouldn't mind getting my hands on that title. You know I couldn't exactly grow up with the Eastern culture. I was born year 89' when democracy swiped the nation and never get to experience that side of culture.

Wonderful review! I really loved this novel as well--and I have The Alchemy of Stone languishing on my TBR pile. I'll have to read it soon!

Harry, I warmly recommend the novel and I think you will be able to relate with a few things in the book :)

Thea, thank you very much :) I have "The Alchemy of Stone" moved closer to my top of my TBR list ;)

Kathy Sedia was one of the greatest surprises for me in 2008. I already read The Alchemy of Stone and her antho Paper Cities.

But, just to add something to the discussion here, I simply loved The Secret History of Moscow and, being a Brazilian, I had virtually no knowledge of Russian lore - even so, I found some interesting points of contact with Brazilian folk tales. That novel totally worked for me.

Fabio, Ekaterina Sedia is a wonderful writer. I believe that "The Alchemy of Stone" is a good novel and can be enjoyed by anyone although I could relate to some notions because of my geographic position :)
And I love reading the folk tales of the world. As a matter of fact I just bought a book with Bengali fairytales published in Romania :)