"The Tower of Shadows" by Drew Bowling 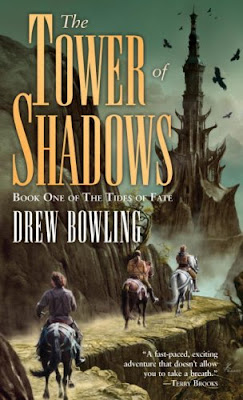 "The Tower of Shadows"
by Drew Bowling
Format: Paperback, 384 pages
Publisher: Del Rey Books
In a fantasy field of young authors dominated by Christopher Paolini and his “Inheritance” series it might be easy to overlook another young author, Drew Bowling, and his debut fantasy novel “The Tower of Shadows”. But I believe that every author deserves his chance and that’s the case with Drew Bowling as well.
Fifteen years ago Corin Starcross was saved by Dale, a wizard, and Wren Tident, a mercenary, from a village attacked by demons, but his brother Cade remained behind. Now, Cade Starcross seeks revenge on the demon that killed his parents and for that he needs his separated brother. But his revenge affects the entire world and Dale and Wren have to save Corin once again from a tragic fate.
Drew Bowling uses in his novel “The Tower of Shadows” a plot and many elements which will be very familiar for the fantasy novels. The specific good and evil characters with their occupations, a retreated mercenary, an apprentice magician, a knight in search of good, an evil wizard, assassins involved in a story of revenge and the eternal battle between good and evil. But taken as a light and easy read, without exaggerated pretentions “The Tower of Shadows” is an action packed adventure. However, I have to admit that for a short (just over 300 pages) and light novel I had difficulties finishing it.
I am always interested in my fantasy readings in world-building and characterization, I like rich worlds and appealing characters, but these aspects fall behind in this novel, mainly because it is a short one and focused on action scenes. Because of Drew Bowling’s descriptions the world looks interesting, but faltered to captivate me more than the initial interest because it is not entirely developed. The religious aspect captured my interest at first too, but after the initial introduction it fails to come to attention again. In the same line with these aspects is the characterization, with characters that fail to entertain and that in many occasions sound untrue. For instance, Wren is a mercenary, but in many fighting scenes looks rather like an amateur than a seasoned fighter and he seems to have more trouble with humans than a particular dragon. Adriel is a young wizard who just finished his apprenticeship, but who doesn’t seem to know how to use magic and who is a boy defending a boy. When it comes to the main negative character he isn’t touched almost at all, without a proper reason behind his actions and motivations.
I also have to say that despite all this Drew Bowling proves to have a talent for writing, creating some beautiful descriptions which capture the reader’s attention. Also on many places his author’s voice sounds more mature than it actually is and I mean that in the good way. I think that Drew Bowling made an effort in writing “The Tower of Shadows” which I don’t believe I would have made in my high-school years. I also believe that he has a lot of room for development and with the proper writing experience he can become an interesting author in the future.
Posted by Mihai A. at 11:00 AM

I read this late in 2007 and it was really an enjoyable book. The whole Eragon series has lost out of touch for me.

I can't wait to read the other books when they come out. I only see Bowling grow as a writer!

Dave, like I said it has a lot of flaws, but I discovered a talented author :)

Cindy, I am looking forward to see how Drew's writing develops :)

Hmm..i guess this is a little like Brandon Sanderson and his Elantris, that wasn`t such a great book.
Sorry, but i`ll miss this one:)

Perhaps if there is a second book it will reveal more. If there were gaps in the information, one would think the editor at Del Ray would have commented to the author about them during the revision stage of publishing.

Bogdan, I found "Elantris" to be an enjoyable read and with all the honesty and respect for Drew Bowling better than "The Tower of Shadows". But also I think that "Elantris" lost a lot through the Romanian translation. The original edition sounds much better :)

Barbara, I don't know much about editing process, although I would like to know more :) Anyway, Drew works on a second novel, but this one can be taken as a single novel as well, because the end is precise and leaves only small hints for an upcoming novel :)

I had a hard time reading this one too. I think it's great that's he's a published author, but I think he needs to work on his trade-craft some to set his work apart from others.

I believe that he has chances of improvement and I hope that he will develop his skill.