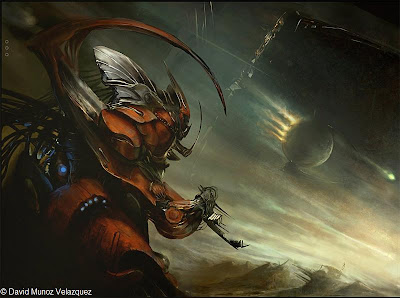 David Munoz Velazquez is a Spanish artist born in 1981 in Barcelona. He studied Graphic design and he specialized in character and environment concept art. David gained experience in the video games industry as well and He was rewarded with several awards from the sites dedicated to digital art such as It’s Art, 3D Total, CGSociety and CGNode. And the site Concept Art World compliments his work naming it, and I quote: “His artwork has hints of a Sci-Fi Dali”.
Interview - David Munoz Velazquez 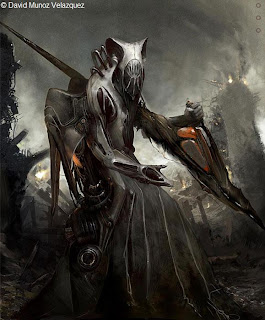 Dark Wolf: David, thank you for this interview.
How did you become interested in art? What was your first attempt to create your own art piece?
David Munoz Velazquez: I think was watching cartoon series when I was younger (I’m still watching) I always like the fine artist, but I remember watching these canvas and thinking, that is a weird photo. My first attempt was copying the Transformers cartoons, Dragon Ball, etc. I don’t really remember the first one, I think was doing characters versions on the same style of the cartoons I liked.
I could say it was when I learned more or less to use the Wacom tablet that gave me more options to practice colours and several things.
Dark Wolf: Do you have any favorite artists? How did they influence your works so far?
David Munoz Velazquez: Difficult question, most of the influence was from the movies, I always wanted to create images and characters like the ones I use to watch. I remember that Boris Vallejo, Ciruelo and a lot of other artists, but basically the ones I had access on comic stores and libraries. Lately I get influenced from things different from art.
Today my favorite artist is Travis Charest, maybe is not the best one but to me has something special.
Dark Wolf: What other influences did you have in your working experience so far?
David Munoz Velazquez: As I said comic books, movies, fine art, architecture and also music, it is difficult to explain but in some way music gives me an attitude or inspiration, sometimes because the lyrics and other times from the rhythm. I believe that most of the time the influences are from very different things apart from art, at what happens to me. 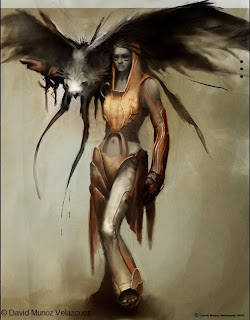 DW: I’ve seen that your portfolio is inclined toward character building and portraits. Do you prefer working on characters and portraits?
DMV: My portfolio is mostly personal work, I work on environment at work so I rather do characters for fun. To me the most interesting thing is character design, most of them are just a design with a little bit of atmosphere to not leave it blank.
Now I rather do character design or portraits on an illustration to make it a complete image not just a design.
I like to work on both environments and characters, but I have a preference for characters.
DW: Your characters make me think of Science Fiction. Does the Science Fiction genre influence your work? Do you have an interest in this genre beside art?
DMV: Sure! I like practically everything about Science Fiction and Fantasy! I also have interest on astronomy and mystic themes. I like normal things also but I rather create things I would like to see and I can't.
DW: I also noticed that not all your characters are entirely human and I could find a cross between humans and animals and characters and materials such metal and plastic. What inspires the creation of a character? Can such a character suffer changes from the inspiration point to the final point of creation?
DMV: I really like the life forms that aren't sure what the body or what is armour or clothing, on some point I was amazed by the exoskeleton animal, which means to me that something that can look as armour or something weird is the actual body of the creature and is completely organic. I like to mix organic with solid and soft surfaces on the character... I just like it.
That's the cool thing about improvising and I get quite a lot of freedom on shapes for a design that can change a lot and adapt while inspiration on some shapes appears and looks fresh or more interesting to me, plus I don't use to have an idea of what I'm going to create so, improvising is the base of my work flow, is slow but really fun. 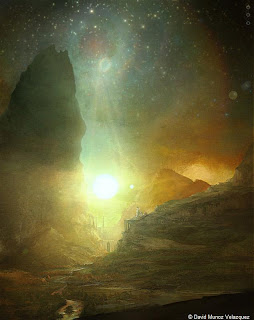 DW: Your characters seem to give the viewer a threatening perspective. Do you like to add your characters a dark and sober atmosphere?
DMV: Yes! Absolutely! That doesn't mean I don't like it other way but that is my favorite. My parents use to tell me your characters look like bad guys but there is some solemnity that makes them be just weird and not that "bad".
I think this gives them a different looking, even though being a bit dark or aggressive. I like characters without mouths or nose or eyes, that makes them show less feelings and I try compensating with something else as much as I can.
DW: Also you work a lot with black and white, shades of black and white, light and dark. Do you think that a black and white piece can be more powerful than a colour one? How important is the use of light and shadows?
DMV: I spend most of the time drawing with pencils, when I jumped on to digital painting I wasn't used to apply colour, so my first work was black and white and slowly I was introducing colours. Now, I start the painting with colours straightaway. Of course the use of light and shadows is basic at least to me to give a solid looking and gives depth and power to the image.
DW: One of my favorite works of yours, “Spanish Girl”, shows a careful attention to the details. How important are the minor details in a work and how do they contribute to the general perspective?
DMV: I thing depends of the intention of the artist and also the style you want to use. To me is interesting to detail some areas and give other less detail or looseness, it looks less saturated of things and gives it more interest from my point of view. It is about making a focus on the things you want to show with more details. 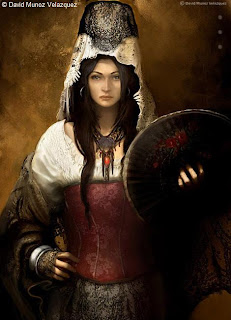 DW: Beside your character concept you have works in environment concept. From these ones do you prefer one more than the other? How much different is the process of creation when it comes to an environment?
DMV: I like both, but I think characters are more interesting to me. Because in my jobs I do mostly environments I like to spend the spare time on characters. But as I said both things are interesting. For the creation things are quite different at least to me, for an environment can be more loose and I think has to be more interesting from colours, perspective, lighting, several basic things that has to come right just for the picture to look correct or believable, than the creative process that has to work at the same time. Also you can be more abstract creating shapes and spend more time refining details... to me it has differences but may be just the way I work on them.
DW: You worked in the video games domain. How was working in this field? What new things did you learn working in the gaming industry?
DMV: When I started my first serious job with Eurocom UK was working on environments, but until that time I was doing drawing and I did some small things on 3D. I learn pretty much everything about 3D and modeling, texturing and especially lighting which is my specialty. For lighting is interesting and difficult because the goal is that every view that the player can see needs to have an interesting lighting.
Since a year and a half more or less I'm working on Kandor Moon which is a 3D animation studio, I'm doing basically lighting but on the movie industry I learn a lot of things, such high-poly modeling, compositing, matte painting and a lot of other things that are needed for films.
DW: What would be a dream job or project for you? If it were possible in what past project involving conceptual art would you have liked to take part?
DMV: I think my dream job would be modeling my own character and some others for a figure action or sculptures. I also would like to specialize on matte painting, I'm still needing a lot of practice on that field.
Thank you very much for your time and answers. It has been a pleasure.
Thank you for the interest on my artwork and for giving me the opportunity to talk about it. It is my pleasure as well!

You can find many other works of David Munoz Velazquez and news about him on his website, munozvelazquez.com.
© The artwork presented on this post is used with the permission of its author. All the artwork is copyrighted. Please do not use the images without the permission of the artist or owner.
Posted by Mihai A. at 12:29 PM

the third image down is stunning!! they are all good of course.

I love Spanish Girl too! There's a touch of American Indian feel to a couple of the pieces. Influence perhaps?

Maria, that "Spanish Girl" is a very good piece. I like it a lot :)

You impress my week by week with amazing artwork.

Thank you very much, Michael :)