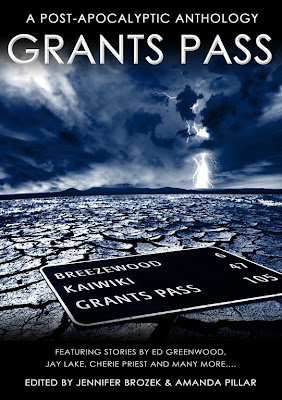 With the great help of books like Stephen King’s “The Stand”, movies like the three Mad Max and games like Fallout I fell in love with the post-apocalyptic scenarios. And since my first encounter with a post-apocalyptic world I am always looking for such scenarios to read, watch or play. Last year I came upon news from Morrigan Books announcing one their upcoming titles, “Grants Pass”, a collection of stories set in a post-apocalyptic world it immediately caught my interest. The synopsis of that title stirred my interest further one:
The world has ended.
It was an act of bio-terrorism gone horribly wrong. A drug resistant version of the Black Death, an airborne mutation of the Ebola virus and the “Super Flu” were let loose on the world. Barely anyone survived.
A year before the collapse, Grants Pass, Oregon, USA, was labelled as a place of meeting and sanctuary in a whimsical online, “what if” post. Now, it has become one of the last known refuges, and the hope, of mankind.
Would you go to Grants Pass based on the words of someone you’ve never met?
As I eagerly await the release date of “Grants Pass”, July 2009, I was treated recently with the line-up of the anthology edited by Jennifer Brozek and Amanda Pillar:
Prelude by Kayley Allard
An Unkindness of Ravens by Stephanie Gunn
Boudha by KV Taylor
Hells Bells by Cherie Priest
Ascension by Martin Livings
Animal Husbandry by Seanan McGuire
Men of Faith by Ivan Ewert
The Chateau de Mons by Jennifer Brozek
The Few that are Good by Scott Almes
Rites of Passage by Pete Kempshall
A Perfect Night to Watch Detroit Burn by Ed Greenwood
Final Edition by Jeff Parish
The Discomfort of Words by Carole Johnstone
Newfound Gap by Lee Clark Zumpe
Ink Blots by Amanda Pillar
Black Heart, White Mourning by Jay Lake
By the Sea by Shannon Page
Remembrance by James M. Sullivan
Epilogue by Kayley Allard
Also it looks like two stories set in the “Grants Pass” universe, “Warlord of Rhode Island” by Rick Silva and “Snake Oil” by David Priebe, will be released online prior to the official launch. The release date is already marked on my calendar.
Posted by Mihai A. at 2:53 PM

Oh awesome. I'm a sucker for (post-)apocalyptic fiction too, be it plagues, zombies, aliens, nuclear war, whatever! I'll be counting down to this release as well. Thanks for the heads up :)

Just put a reminder in my calendar, too!

Thank you! I too love post apocalyptic fiction! The Road by Cormac McCarthy was awesome. I added this book to my list for this year.

What a great idea for an anthology. I'll be looking for it too.

Thea, I am sucker for post-apocalyptic too. And if it is darker fiction even better :)

Sbp, it certainly is and I am very curious about Jay Lake's story.

Jacquelyn and Rick, I eagerly await the release date :)

That wee bit of a synopsis made me go WOW! I've put this book onto my book list at the top. Thanks, Mihai.

Thank you so much for doing this, I appreciate it very much!

I'll make sure to send you a review copy of this (give me a nudge if I forget).

Mark, it's my pleasure. And thank you very much, I am looking forward to this read :)

Sounds like an interesting twist on the mass death. Would I go to what might be a paradise or would I suffer? I'll have to keep an eye out for it.

Indeed it raises an interesting question. And this is another element that draws me to post-apocalyptic fiction, the humans are facing situations in which their reactions are hard to predict. I hope I will not have to see it for myself :)