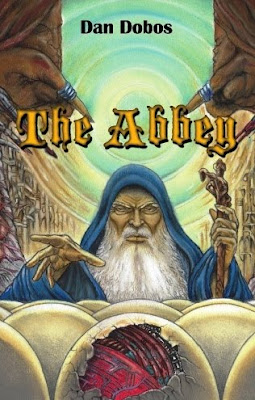 Last year I read and reviewed with pleasure a Romanian SF novel, “The Abbey” (Abația) by Dan Doboș. “The Abbey” is the first novel in a trilogy, “The Trilogy of the Abbey”, published in 2002, named the Best Romanian Science-Fiction Novel of 2002 and with the entire trilogy awarded the Vladimir Colin Award in 2006. I am not certain if the first editions of the novels are still available, but I personally read a revised and added edition of “The Abbey”, released in 2008, and I am hoping that Millennium Press, the publishing house that republished the novel, will make the following two novels available soon, because like I said in my review “The Abbey” is an interesting novel and sets the premises for a captivating trilogy. Until then though I was very happy to find that Dan Doboș’s novel, “The Abbey” (Abația) is available in English since the end of July this year, published by Better Karma, an independent publishing house. I am happy because “The Abbey” truly deserves to reach the English market and that now more readers can explore the Romanian Science Fiction with the help of Dan Doboș’s “The Abbey”. As far as I could see the novel is available on Amazon and The Book Depository, with the following synopsis on the Amazon page:
Saint Augustine defined six periods of human life with the last being the Armageddon - when the armies of humans, lead by a Messiah who has again come down on Earth, will have to defeat the forces of evil. More than three thousand years after this prophecy was made, the Abbey is the only religious entity still standing. Radoslav, the Abbot who rules the Augustinian Order, knows that the Armageddon is about to break out soon but he can't decide what will trigger it. It might be the first contact with an extraterrestrial civilization; it is possible that the attempt of imperial administration to replace the clones from the Agricultural Worlds with aliens will degenerate into a cosmic conflict; and the super-soldier sent to spy on the Abbey is also a great worry. As this fascinating, complex plot develops, it becomes clear that the final fight is not between good and evil, but between those who believe in God and those who decline Him. The Abbey offers a unique perspective on how religion could develop and evolve in a far-away future. Is humanity's real purpose to protect God from reaching His own limits? The author offers daring hypotheses and original thinking in this multi-layered fantasy filled with spirituality and insight.
Posted by Mihai A. at 1:00 PM

Thanks for mentioning this! I had been keeping an eye out for this book in English since your review last year.

Benjamin, I hope you'll like it if you get a chance to read it :)