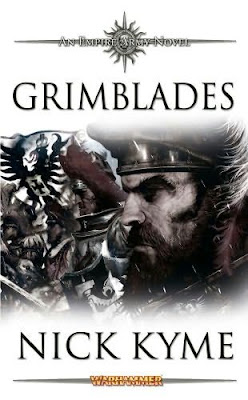 "Grimblades"
by Nick Kyme
Format: Paperback, 416 pages
Publisher: Black Library
Review copy received through the courtesy of the publisher, Black Library
When orcs and goblins invade the Empire, the Emperor Dieter IV does nothing. While the other elector counts bicker, Prince Wilhelm is left to defend the Reikland alone. The Grimblades are among his brave army that opposes the greenskins. Amidst desperate war across the Empire and a plot to kill the prince, the Grimblades must survive this orc invasion and be victorious.
Among my small pleasures, I cannot name them guilty because they are not, are the tie-in novels of Warhammer and Forgotten Realms. Every once in a while I feel the need to immerse myself within these two universes and then there is no other better opportunity to pick one of these novels. With the summer holiday in prospect I started to select the books I wanted to take with me on vacation and I immediately picked a Warhammer one, in this case Nick Kyme’s “Grimblades”.
The Warhammer universe is rich in wars, skirmishes and tension and “Grimblades” writes another page of conflict on the Old World. Reikland is invaded by the green horde of orcs and goblins but not everyone in the land will see the threat the greenskins pose. Old and new political conflicts will not help Reikland to raise a proper defensive force in the face of this invasion. Nick Kyme doesn’t concentrate his work on the political aspects of the story, but they are present. With a rather background presence they will set a proper stage however for the conflicts and battles that make the bulk of “Grimblades”. Still, to make the story remove the monotonous cadence of constant violent collisions and battles between the engaged forces, Nick Kyme makes use of a conspiracy scheme. Although the respective plot is not an overly complex one, together with the political conflicts will add a new dimension to the general conflict and will give the reader a welcomed respite between the energy brimming fightings.
The defensive force is small, but fierce, and among it we can find one of the Empire army corps, the 16th Halberdiers, known as the Grimblades and from among them only nine or ten lead by Sergeant Feder Karlich form the main cast of the novel. I believe that it is for an author to deal with a large cast of characters and this aspect makes itself felt in this novel. Nick Kyme sketches his characters, some of them with a more prominent outline than the others. There are small glances that we can throw into some of the characters past and these give them identity and a certain density. Not all held my interest for a long time though and it took too long for the entire group to engage me in its destiny, although in the hindsight I think it left me rather indifferent. The secondary characters play their part in the story, but they suffer more and are easily forgettable.
The main feature of the novel is the fighting and battle scenes and the reader will get those a lot. From the small skirmishes to the battles of grand proportions Nick Kyme will not waste any occasion for action packed and tensioned conflicts. The scenes of smaller proportion appealed to me the most, such as those from the small and recently ransacked village or that when the Grimblades found in a recognition mission discover a spy, and hold more tension than those with a greater setting, but most of the time all quite entertaining. It is true that at some points the scenes seem repetitive and the author uses almost the same description, but that happens only on a few occasions. I believe that the battle scenes in general and the story in particular would have benefited more if the reader had had access to them. This way Grom the Paunch and his green horde play only the role of the opposing force, without imposing a consistent threat and diminishing from the menace they are supposed to be.
I would not recommend “Grimblades” to a reader who is unfamiliar with the Warhammer universe, because the novel can make a wrong impression about this setting. But Nick Kyme offers a light and quite entertaining novel, full of fighting, if you are in search for such a reading.
Posted by Mihai A. at 12:00 PM