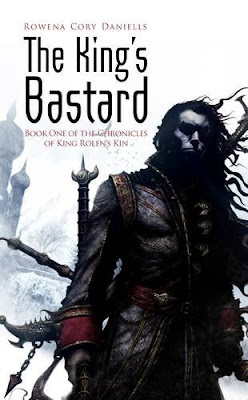 First of all: I just noticed it so thank you very much to adding me to your blogroll - it means quite a bit to me!

Secondly:
I can say with confidence that if you even moderately enjoyed this first novel in the Chronicles of King Rolen's Kin then you'll derive great enjoyment from the sequels. I've already read The Uncrowned King and am 90% of the way through The Usurper and though I wouldn't say they get 'darker'- as you might wish it - they do hold up very well, continuing all that is good in The King's Bastard and even perhaps surpassing it. I look forward to reading your thoughts on those.

I liked the book a lot. I have been impressed by how you can change the mood of a conversation with a few words at the wrong time or using the wrong stress.
I look forward to reach the rest of the trilogy.

LEC, thank you very much for the link too :)
I enjoyed "The King's Bastard". Not as much as other novels, but I did enjoy it. Therefore I will read the next novels in the series, because I am certainly curious to see how it ends.

Michael, I am certain that I will read the next novels too :)

Love King Rolen's Kin Trilogy, read all three in a week. Best paced Fantasy books I have read in a long while

Sean, it is not exactly one of my favorites, although I did enjoy some of its aspects. However, it seems that picking up the sequels for reading is a bit harder for me, I give priority to other books. Hopefully, the next two novels in the series will get their chances sometime in the future :)