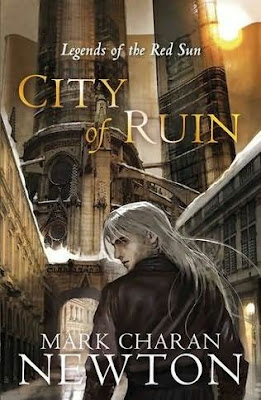 "City of Ruin"
by Mark Charan Newton
Format: Hardback, 480 pages
Publisher: Tor UK
Review copy received through the courtesy of the publisher, Tor UK
Villiren: a city of sin that is being torn apart from the inside. Hybrid creatures shamble through shadows and barely human gangs fight turf wars for control of the streets.
Amidst this chaos, Commander Brynd Lathraea, commander of the Night Guard, must plan the defence of Viliren against a race that has broken through from some other realm and already slaughtered hundreds of thousands of the Empire’s people.
When a Night Guard soldier goes missing, Brynd requests help from the recently arrived Inqusitor Jeryd. He discovers this is not the only disapearance the streets of Villiren. It seems that a serial killer of the most horrific kind is on the loose, taking hundreds of people from their own homes. A killer that cannot possibly be human.
The entire population of Villiren must unite to face an impossible surge of violent and unnatural enemies or the city will fall. But how can anyone save a city that is already a ruin?
With a constantly growing pile of books that I wish to read the choice for the next reading doesn’t come always easily. This situation leads to another aspect, the titles I most eagerly await to be published eventually end in the same pile and are read later then I would like. One such title is the “City of Ruin”, the second novel in the “Legends of the Red Sun” series of Mark Charan Newton, which although found its way on my pile of books for some time now, it took its place on the reading desk later then I hoped.
“Nights of Villjamur”, the first novel in Mark Charan Newton’s series, introduced the reader to a world in the brink of its collapse and focused mainly on the city of Villjamur, the capital of the mighty Jamur Empire. “City of Ruin” reflects the same collapsing world, crumbling from the inside, but focusing a bit more on the outside threats that excite further pressure on the world. Standing in front of this menace is Villiren, a city that is the smaller image of the world from which is a part, facing its downfall from the inside as much as from the outside.
As with Villjamur, Mark Charan Newton works his best on building a vibrant and dynamic city. More so, Villiren pulsates life from its every vein and every aspect of this life making the foundation of the city stronger. It is very true that not every prospect of Villiren molds a pleasant feature of the city, I even think that these are in preponderance, creating a rather similar image with the biblical cities of Sodom and Gomorrah, but that makes the image even more powerful. The underground is entangled with the local authority each one in its personal interest, interests applied often through brute force, the rich tend to become richer and the poor poorer and the ethnic and sexual racism a constant presence. In fact, in many occasions Villiren seems to import the political, economical and social problems of our world, making the reader less comfortable and to reflect on the state of our reality.
With a new location “City of Ruin” introduces new characters, but without cutting from the presence of those with an important role in “Nights of Villjamur”. Brynd Lathraea, Rumex Jeryd, Randur Estevu or Eir Jamur will find their steps drawn towards Villiren and their destinies tied to that of the city, with Malum, Nelum Valore, Lupus Bel and Beami brining new threads and stories. Once again the reader will have a few storylines to follow, but every single one makes the general concept advance through its unique feature. Military elements make their presence felt, with invading forces, elite troupes, tactical decisions and battles. Mystery brings elements of surprise and tension, but also grotesque images in a strange mix that reminded me of the surreal song of The Cure, “Lullaby”. Romance is not forgotten, lovers rediscovering each other or continuing their sentimental relationship in different and personal ways. Adventure, quests, religion, magic and relics complete the entire image of “City of Ruin”.
I have to say though that “City of Ruin” not only follows the same approach as “Nights of Villjamur”, but also suffers at the same chapter. Like in “Nights of Villjamur” the storylines are intertwined, but once again some of the stories lie forgotten in the background for the span of a few chapters only to pop up again when the reader starts to ask where they disappeared. The rhythm of “City of Ruin” is slow, but I cannot make a complain here, because it can be seen that Mark Charan Newton allows his novel to grow in a natural way, without jumping over stages and therefore reaching the climax of the novel at its end. The final part offers plenty of action and fighting scenes, but nothing is taken for granted, situations shift, characters disappear and plenty of surprises await the reader.
Although “City of Ruin” is obviously connected to the first novel in the “Legends of the Red Sun” series, “Nights of Villjamur”, it can be read as a stand-alone novel without a problem. However, “City of Ruin” proves that Mark Charan Newton is growing fast as a writer, his prose, story and philosophical approach making his work more robust. I am certain that in this cadence Mark Charan Newton’s series can turn to be one of the landmarks of modern fantasy.
Posted by Mihai A. at 12:30 PM