Cover choice: "The Book of Transformations" by Mark Charan Newton 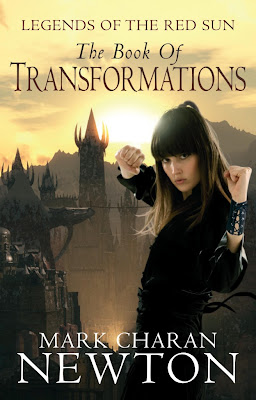 Mark Charan Newton in today’s post of his blog asks us for our help. The third novel of his “Legends of the Red Sun”, “The Book of Transformations”, has a cover art draft already. On Mark’s blog we can see two different crops of the artwork and he wants to know which one works the best for us.
Well, I have to be honest and say that neither works for me. I do like the background scenery, the city spires and towers, especially how they are seen in the second image. I like the mountains and the setting sun behind the city too, because it works best with the title of Mark Charan Newton’s series, although I have to admit that I would like the colors to be a bit more balanced. But I do not like the central character, I rarely do on a book cover. The central character is too clearly outlined, without leaving anything to the imagination. I also am not quite sure how the character works on the setting, but that remains to be seen when will get the chance to read the novel. Therefore, I personally would like a cover artwork without the central character, concentrated on the setting and scenery.
Leaving the cover aside a bit, it is nice to learn though that “The Book of Transformations” will feature a new character. 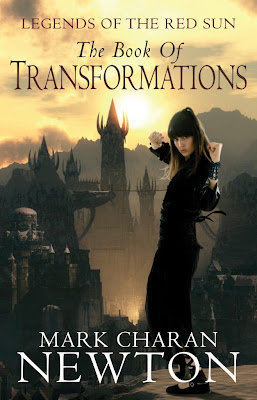