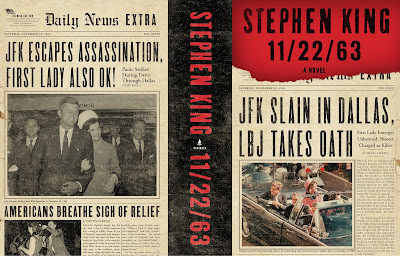 It seems that this is a week of covers. This time, however, it is the moment of the King himself, because yesterday on Stephen King’s official message board the hardcover dust jacket of the Scribner edition of the anticipated “11/22/63” was revealed. The design is created by Rex Bonomelli and looks marvelous. A perfect companion for one of the novels I am eagerly looking forward to read this year. Stephen King’s “11/22/63” is another massive volume, close to 1000 pages, but there are plenty of reasons for me to put his novel on My Most Wanted list of books. To be brief and not to enumerate all the reasons why I am waiting for 8th of November, the release date of Stephen King’s “11/22/63”, I show you only two of them, the one you see above and the one I post below :)

On November 22, 1963, three shots rang out in Dallas, President Kennedy died, and the world changed. What if you could change it back? Stephen King's heart-stoppingly dramatic new novel is about a man who travels back in time to prevent the JFK assassination - a thousand page tour de force.

Following his massively successful novel Under the Dome, King sweeps readers back in time to another moment - a real life moment - when everything went wrong: the JFK assassination. And he introduces readers to a character who has the power to change the course of history.

Jake Epping is a thirty-five-year-old high school English teacher in Lisbon Falls, Maine, who makes extra money teaching adults in the GED program. He receives an essay from one of the students - a gruesome, harrowing first person story about the night 50 years ago when Harry Dunning's father came home and killed his mother, his sister, and his brother with a hammer. Harry escaped with a smashed leg, as evidenced by his crooked walk.

Not much later, Jake's friend Al, who runs the local diner, divulges a secret: his storeroom is a portal to 1958. He enlists Jake on an insane - and insanely possible - mission to try to prevent the Kennedy assassination. So begins Jake's new life as George Amberson and his new world of Elvis and JFK, of big American cars and sock hops, of a troubled loner named Lee Harvey Oswald and a beautiful high school librarian named Sadie Dunhill, who becomes the love of Jake's life - a life that transgresses all the normal rules of time.

A tribute to a simpler era and a devastating exercise in escalating suspense, 11/22/63 is Stephen King at his epic best.

It's nice to have new Stephen King to look forward to every year, isn't it? He could write a bloody cookbook and I'd read it, it's gotten to be such a tradition. :)

So I don't recall: did you like Under the Dome, Mihai?

Well, I am little behind with my readings and among those is "Under the Dome" too. But I do hope to catch up. Especially with the upcoming of "11/22/63". And indeed it is nice too see Stephen King coming up with something every year :)

Oh, so many books to read... I guess I'll have to forget about all the others and read 11/22/63 when it comes out. I'm very rarely disappointed by Stephen King... Under the Dome was great btw, I listened to the audio book and ended up staying up very late a few nights because I simply had to know what happens.

The title of this book caught my attention and interests...I remember vividly the day JFK was killed...I was young looking at the big black and white boob tube when life was simple then....The book sure brought back some memories (blasts from the past) and caused me to chuckle...I too have wondered if Lee did it on his own and depending on who or what you believ or listen to you just might convince yourself....I could easily fall either way....I love to read and this is my first review of any book I've read.