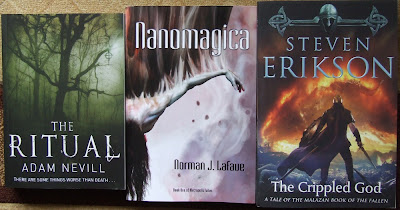 Three new arrivals lately in my mailbox. Adam Nevill’s “The Ritual” sounds very appealing and it is one of the novels I am looking forward to read. Now is my chance, but not before tackling the other two novels of Adam Nevill which I have in my personal library, “Banquet for the Damned” and “Apartment 16”. Hopefully I will manage it before the publication date of “The Ritual” or around it. Steven Erikson’s series still lies unread on my bookshelves, with the exception “Gardens of the Moon”. My plans of reading “Malazan Book of the Fallen” series failed miserly. But with the arrival of “The Crippled God” I hope that I will get my final push for reading the entire Steven Erikson’s series. I am keeping my fingers crossed. Norman J. Lafave’s “Nanomagica” comes with an interesting concept and although I am a bit reluctant lately towards small press titles, due to a recent series of unfortunate encounters, I hope to give “Nanomagica” its deserved chance.

- “The Ritual” by Adam Nevill (through the courtesy of Pan Macmillan)

And on the third day things did not get better. The rain fell hard and cold, the white sun never broke through the low grey cloud, and they were lost. But it was the dead thing they found hanging from a tree that changed the trip beyond recognition.

When four old University friends set off into the Scandinavian wilderness of the Arctic Circle, they aim to briefly escape the problems of their lives and reconnect with one another. But when Luke, the only man still single and living a precarious existence, finds he has little left in common with his well-heeled friends, tensions rise.

With limited fitness and experience between them, a shortcut meant to ease their hike turns into a nightmare scenario that could cost them their lives. Lost, hungry, and surrounded by forest untouched for millennia, Luke figures things couldn’t possibly get any worse.

But then they stumble across an old habitation. Ancient artefacts decorate the walls and there are bones scattered upon the dry floors. The residue of old rites and pagan sacrifice for something that still exists in the forest. Something responsible for the bestial presence that follows their every step. And as the four friends stagger in the direction of salvation, they learn that death doesn’t come easy among these ancient trees . . .

Savaged by the K’Chain Nah’Ruk, the Bonehunters march for Kolanse, where waits an unknown fate. Tormented by questions, the army totters on the edge of mutiny, but Adjunct Tavore will not relent. One final act remains, if it is in her power, if she can hold her army together, if the shaky allegiances she has forged can survive all that is to come. A woman with no gifts of magic, deemed plain, unprepossessing, displaying nothing to instill loyalty or confidence, Tavore Paran of House Paran means to challenge the gods – if her own troops don’t kill her first.

Awaiting Tavore and her allies are the Forkrul Assail, the final arbiters of humanity. Drawing upon an alien power terrible in its magnitude, they seek to cleanse the world, to annihilate every human, every civilization, in order to begin anew. They welcome the coming conflagration of slaughter, for it shall be of their own devising, and it pleases them to know that, in the midst of the enemies gathering against them, there shall be betrayal.

In the realm of Kurald Galain, home to the long lost city of Kharkanas, a mass of refugees stand upon the First Shore. Commanded by Yedan Derryg, the Watch, they await the breaching of Lightfall, and the coming of the Tiste Liosan. This is a war they cannot win, and they will die in the name of an empty city and a queen with no subjects.

Elsewhere, the three Elder Gods, Kilmandaros, Errastas and Sechul Lath, work to shatter the chains binding Korabas, the Otataral Dragon, from her eternal prison. Once freed, she will rise as a force of devastation, and against her no mortal can stand. At the Gates of Starvald Demelain, the Azath House sealing the portal is dying. Soon will come the Eleint, and once more, there will be dragons in the world.

- “Nanomagica” by Norman J. Lafave (through the courtesy of Trapdoor Books)

By 2088, genetic engineering and nanotechnology have merged to create a near Elysian existence. Mankind is on the brink of immortality – disease, famine and pollution have been eradicated using this new technology – with seemingly magical results.

Behind this perfect mask, however, lurks a hidden threat – revealed by puzzling, apparently random tragedies. Chicago Police Inspector Robert Nazio and the brilliant Greg Gilroy, an anarchist and master hacker, find themselves thrown together at the center of an international crisis filled with twists, turns and technology gone awry.

Assembling a super team of intelligence experts, the investigation quickly evolves into a race to save the Earth from a diabolical threat that seems to be everywhere at once – infiltrating governments, corporations and research laboratories seemingly at will. Nazio and Gilroy’s only hope seems to lie in two Renaissance Festival throwbacks - illusionists who have magic of their own.

With paradise collapsing, who will win the battle - technology or magic?

Thank you all very much!