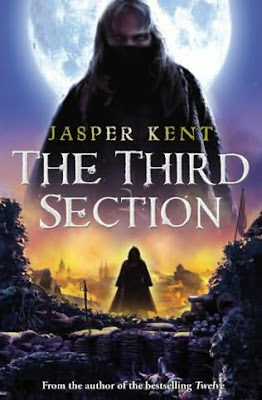 Looking over the past year I see that I have to catch up on a few things. Among them, my readings fell heavily behind, with a few titles that I really wished to read at their release time, but due to some reason or another I failed to do so. One of such titles is Jasper Kent’s “Thirteen Years Later”, the second novel in his “Danilov Quintet”, because I loved “Twelve”, the novel with which Jasper Kent kicks off his series. I really hope that I will manage to get back on track with my readings, “Thirteen Years Later” one of the priorities, especially since Bantam Press will release Jasper Kent’s third novel, “The Third Section”, on August. Now, we can see the cover of “The Third Section”, one that I am pleased to find that follows the line imposed by the first two covers. I like when a series follows a similar line on the covers, it gives it a sense of completeness and solidity. This is the case with all the Jasper Kent’s novels in the “Danilov Quintet” so far, three covers in a similar fashion, with a mix of historical and supernatural feelings that can be discovered between the covers as well. It is a series of covers that appeals highly to me.

Russia 1855. After forty years of peace in Europe, war rages. In the Crimea, the city of Sevastopol is besieged. In the north, Saint Petersburg is blockaded. But in Moscow there is one who needs only to sit and wait – wait for the death of an aging tsar, and for the curse upon his blood to be passed to a new generation.
As their country grows weaker, a man and a woman - unaware of the hidden ties that bind them - must come to terms with their shared legacy. In Moscow, Tamara Valentinovna Komarova uncovers a brutal murder and discovers that it not the first in a sequence of similar crimes, merely the latest, carried out by a killer who has stalked the city since 1812.
And in Sevastopol, Dmitry Alekseevich Danilov faces not only the guns of the combined armies of Britain and France, but must also make a stand against creatures that his father had thought buried beneath the earth, thirty years before.

Yesterday I finished Thirteen Years Later.
What a great read! It belongs to the best books I read in 2011 so far!!
I'm sure you will love it too.

And what a surprise when I read the AUTHOR'S NOTES:
"I would like to say a sincere thank you to Mihai Adascalitei for his help with the Romanian language."

Now I can't wait to read The Third Section.

The cover work art is excellent and fits perfectly to the books.

Michael, thank you very much! Although truth be told my contribution wasn't that much. Jasper was very nice though :)
I am looking forward to read both of them :)