Cover art - "The Alloy of Law" by Brandon Sanderson 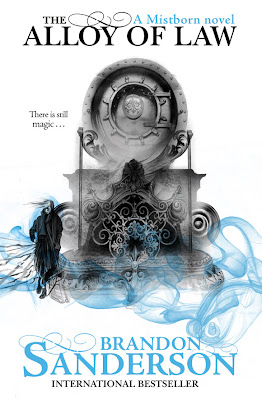 Some of the most interesting cover artworks I’ve seen are featured on Brandon Sanderson’s novels. And although I am not exactly a fan of the covers for the paperback editions of his “Mistborn” novels released by Tor Books, the ones on the hardback editions are very interesting. However, seeing on Aidan’s A Dribble of Ink and Adam’s The Wertzone blogs the UK cover for the upcoming “The Alloy of Law”, it got me thinking at the series of covers for the Gollancz editions of Brandon Sanderson’s novels. Looking simple compared with the US editions, but equally efficient, these strokes of brush and bare touch of color work very well for me. It proves that a minimalist concept can work wonders on a cover of a novel as well. Brandon Sanderson’s “The Alloy of Law” will be released in the US on 8th November by Tor Books and in the Uk on 17th November by Gollancz.

The cover you have posted here certainly works for me. Very nice indeed.

John, sometimes a simpler cover works better for me :)