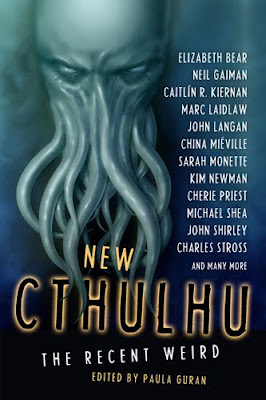 I didn’t set many resolutions at the beginning of this year since lately I mostly failed to achieve them. However, one in particular started well so far and promises to be fulfilled, even over passed. It is my desire to read more short fiction this year and I already did, although the time didn’t allow me to review what I read yet. It is mostly online short fiction, but I also read two anthologies, that hopefully I will be able to review soon. Also, I already spotlighted a few more upcoming wonderful anthologies here on my blog and at the end of the year will make a review of all of them and see what I managed to achieve with them.

Here is the description of “New Cthulhu: The Recent Weird” edited by Paula Guran and the impressive line-up of stories and authors posted by Sean Wallace on his blog:

“That is not dead which can eternal lie, yet with stranger aeons, even Death may die.”
For more than eighty years H.P. Lovecraft has inspired writers of supernatural fiction, artists, musicians, filmmakers, and gaming. His themes of cosmic indifference, the utter insignificance of humankind, minds invaded by the alien, and the horrors of history — written with a pervasive atmosphere of unexplainable dread — today remain not only viable motifs, but are more relevant than ever as we explore the mysteries of a universe in which our planet is infinitesimal and climatic change is overwhelming it.
In the first decade of the twenty-first century the best supernatural writers no longer imitate Lovecraft, but they are profoundly influenced by the genre and the mythos he created. New Cthulhu: The Recent Weird presents some of the best of this new Lovecraftian fiction — bizarre, subtle, atmospheric, metaphysical, psychological, filled with strange creatures and stranger characters — eldritch, unsettling, evocative, and darkly appealing . . .

“The Crevasse” by Dale Bailey & Nathan Ballingrud
“Old Virginia” by Laird Barron
“Shoggoths in Bloom” by Elizabeth Bear
“Mongoose” by Elizabeth Bear & Sarah Monette
“The Oram County Whoosit” by Steve Duffy
“Study in Emerald” by Neil Gaiman
“Grinding Rock” by Cody Goodfellow
“Pickman’s Other Model (1929)” by Caitlin Kiernan
“The Disciple” by David Barr Kirtley
“The Vicar of R'lyeh” by Marc Laidlaw
“Mr Gaunt” by John Langan
“Take Me to the River” by Paul McAuley
“The Dude Who Collected Lovecraft” by Nick Mamatas & Tim Pratt
“Details” by China Mieville
“Bringing Helena Back” by Sarah Monette
“Another Fish Story” by Kim Newman
“Lesser Demons” by Norm Partridge
“Cold Water Survival” by Holly Phillips
“Head Music” by Lon Prater
“Bad Sushi” by Cherie Priest
“The Fungal Stain” by W.H. Pugmire
“Tsathoggua” by Michael Shea
“Buried in the Sky” by John Shirley
“Fair Exchange” by Michael Marshall Smith
“The Essayist in the Wilderness” by William Browning Spencer
“A Colder War” by Charles Stross
“The Great White Bed” by Don Webb

As usual, guran's anthos are just recompilations of much better books relesead a couple of years earlier.

Joshi's Black Wings and Datlow's Lovecraft Unbound are the "sources of inspiration" for this one.

True, but it still looks very good. Especially since "Black Wings" is a bit too expensive for me :)

I am very excited about this book, and happy to have one of my wee tales therein. The contents is especially good and there are a number of stories I have not had a chance to read. What a great line-up of writers! The book showcases Cthulhu Mythos tales written this past decade, and as such gives me confidence that we have much to look forward to in the Lovecraftian genre.

As a reprint anthology, this is extremely good, with a wide variety of approaches to Lovecraftian weird fiction. I myself have read only a handful of these tales and so I am grateful to have them all in one cover. The book is generating a huge buzz online and this bodes well for such books in the future. I am proud to be among ye eldritch crew of writers.