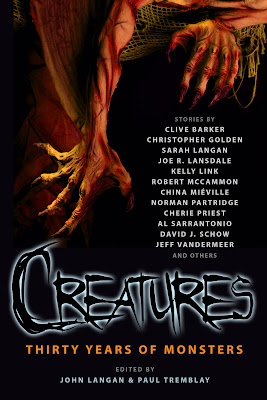 After finding out about one anthology dedicated to monsters, Christopher Golden’s “The Monster’s Corner”, I recently discovered yet another very interesting one, “Creatures! Thirty Years of Monster Stories”. In my almost daily wanders around the Internet I found that John Langan and Paul Tremblay edited a new anthology featuring monster fiction and due to be released by Prime Books in November this year. I have to say that not only that the John Langan and Paul Tremblay’s anthology sounds interesting, but also the authors line-up looks very appealing, with some of the heavy names of speculative fiction present with stories on “Creatures! Thirty Years of Monster Stories”. With such a strong Table of Contents November seems so far away, but until then we can keep up to date by visiting the blog dedicated to the anthology edited by John Langan and Paul Tremblay.

IT CAME AND WE KNEW IT
“Godzilla’s Twelve-Step Program” by Joe R. Lansdale
“The Creature from the Black Lagoon” by Jim Shepard
“After Moreau” by Jeffrey Ford
“Among Their Bright Eyes” by Alaya Dawn Johnson
“Under Cover of Night” by Christopher Golden
“The Kraken” by Michael Kelly
“Underneath Me, Steady Air” by Carrie Laben
IT CAME WE COULD NOT STOP IT
“Rawhead Rex” by Clive Barker
“Wishbones” by Cherie Priest
“The Hollow Man” by Norm Partridge
“Not from Around Here” by David J. Schow
“The Ropy Thing” by Al Sarrantonio
“The Third Bear” by Jeff Vandermeer
IT CAME FOR US
“Monster” by Kelly Link
“Keep Calm and Carillon” by Genevieve Valentine
“The Deep End” by Robert R. McCammon
“The Serpent and the Hatchet Gang” by F. Brett Cox
“Blood Makes Noise” by Gemma Files
“The Machine Is Perfect, the Engineer Is Nobody” by Brett Alexander Savory
“Proboscis” by Laird Barron
IT CAME FROM US
“Familiar” by China Miéville
“Replacements” by Lisa Tuttle
“Little Monsters” by Stephen Graham Jones
“The Changeling” by Sarah Langan
“The Monsters of Heaven” by Nathan Ballingrud
“Absolute Zero” by Nadia Bulkin

Now that's one I want to get my hands on!

I am really looking forward to it, too :)