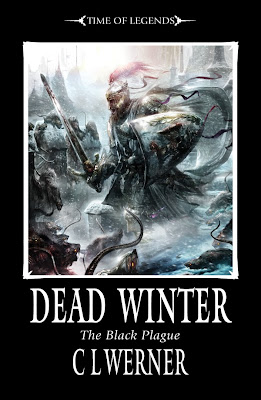 One of the best fantasy artists and one of my top favorites is Jon Sullivan. Jon Sullivan’s works are always making me lose time in their admiration, but it is time well spent. Among his wonderful works we can find the cover artworks Jon Sullivan made for The Black Library’s novels, series of covers which would make me buy the novels without much other consideration if I wouldn’t know better. In the near future The Black Library will offer the readers, once again, to delight in one of Jon Sullivan’s covers, realized for one of their Warhammer titles. This time it is C.L. Werner’s “Dead Winter”, due to be released on May 2012. I loved C.L. Werner’s “Grey Seer” and “Temple of the Serpent” novels, featuring the skaven Thanquol, and I am happy to see Jon Sullivan’s artwork on one of C.L. Werner’s novels. Especially since the artwork looks really great, with a terrific atmosphere, excellent details and some nasty looking elements (in the favor of the artwork, of course). A wonderful cover that makes me eagerly await the release of the novel. You can also find more close-up details of the cover on The Black Library’s blog and more amazing artworks by Jon Sullivan on his website.

As for C.L. Werner’s “Dead Winter”, it sounds threatening, but very interesting:

More than a thousand years after the Age of Sigmar, the Empire he struggled to create rests on the edge of destruction – the reign of the greedy and incompetent Emperor Boris Goldgather has shaken down the great and prosperous edifice of his erstwhile realm. Without warning, a terrible and deadly plague strikes, wiping out entire villages and leaving towns eerily silent through the long frozen months. As the survivors struggle to maintain order and a worthy military presence, vermin pour up from the sewers and caverns beneath the cities, heralding a new and unspeakable threat – the insidious skaven!