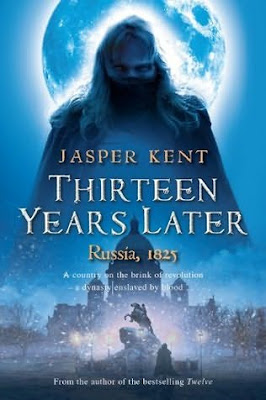 "Thirteen Years Later"
by Jasper Kent
Publisher: Bantam Press (UK) & Pyr (USA)
Previous novels in the series: "Twelve"
Review copy received through the courtesy of the UK publisher, Bantam Press
1825. Russia has been at peace for a decade. Bonaparte is long dead and the threat of invasion is no more. For Colonel Aleksei Ivanovich Danilov, life is calm. The French have been defeated, as have the twelve monstrous creatures he once fought alongside, and then against, all those years before. His duty is still to his tsar, Aleksandr the First, but today the enemy is merely human.
However, the tsar himself knows he can never be at peace. He is well aware of the uprising fermenting within his own army, but his true fear is of something far more terrible – something that threatens to bring damnation upon him, his family and his country. Aleksandr cannot forget a promise: a promise sealed in blood … and broken a hundred years before.
Now the victim of the Romanovs’ betrayal has returned to demand what is his. The knowledge chills Aleksandr’s very soul. And for Aleksei, it seems the vile pestilence that once threatened all he held dear has returned, thirteen years later …
Despite a long period of reluctance towards vampires I picked Jasper Kent’s debut novel, “Twelve”, a while back with interest and it proved to be the right choice. As much as I enjoyed “Twelve” and I was looking forward to its sequel, “Thirteen Years Later”, with a constantly growing personal library it took me longer than I expected to start reading the second novel in Jasper Kent’s “The Danilov Quintet”.
1825 finds Russia in the brink of tumultuous changes and Aleksei Ivanovich Danilov is found in the middle of it. However, not only the present keeps Aleksei’s hands full, but also the past with which he tries to find a small portion of peace and which will come alive again in an unexpected and surprising manner. The events that took place thirteen years ago come back into focus and Aleksei finds himself staring directly into his past. The readers unfamiliar with the respective events will find no problem in keeping pace with them, because Jasper Kent keeps track of the past story, without leaving anything aside for the new readers, but also without impending the reading of the present story for those who know them, introducing Aleksei’s past gradually.
I remembered Aleksei Ivanovich Danilov as a pleasant character and this aspect didn’t change. The years have passed over him, but that is only naturally and fortunately Jasper Kent keeps the natural course of life into account when he develops the main character of “Thirteen Years Later” further on. This aspect, but not only, makes Aleksei such a believable character. His interaction and relationships with the other characters add to the construction of his character. Especially those concerning his wife, lover, son, ruler and enemy enforce the outline of the “Thirteen Years Later” main protagonist. He is not a perfect character, but he has enough power to become a memorable one.
“Thirteen Years Later” has two prevailing ingredients, the historical and the speculative. Jasper Kent manages successfully to sustain both of them and to mix them when necessary without altering the result. The speculative aspects make their presence felt more than in the previous novel, “Twelve”, taking the place into the spotlight more often. There are few surprises that enrich the speculative elements, but also a few predictable ones that can be easily guessed. The historical part of the novel is very well executed. There is not one point in which I felt that the setting is misplaced and the story forced to fit the period when it’s taking place. “Thirteen Years Later” gravitates around the legend of the Alexander I of Russia’s mysterious death and Jasper Kent offers the reader his vision on the matter. The historical anxiety Russia passed in December 1825 is excellently captured and with great talent. The mix with the speculative elements of the plot gives Jasper Kent’s story a new dimension and an original interpretation for the legend of Alexander I’s death.
However, on both main ingredients of “Thirteen Years Later” there were a couple of things that didn’t fit into the story very well for me. First of all is the ease with which Aleksei confines in the tsar’s doctors about the voordalaki and the speed with which these two accept the supernatural presence doesn’t seem exactly right. Also, Jasper Kent doesn’t manage to raise the character of Aleksandr Pavlovich Romanov at any moment to the height where the ones surrounding the tsar elevates him to. Another uncomfortable side of the novel is its pace. As I said the readers unfamiliar with the story of “Twelve” and which has a major role in “Thirteen Years Later” will find themselves in no difficulty, because Jasper Kent introduces them to the past events. Although there are no long passages of recollections impeding the reader the past events are mentioned too often and the result is a constant break into rhythm of the story, slowing down its development. It will be an injustice to say that “Thirteen Years Later” is entirely slow though. Split into three sections the novel gathers momentum in each of its parts and each of the three final parts end in action scenes very well paced.
“Twelve” was a wonderful surprise for me at the time of its publication, but “Thirteen Years Later” didn’t rise to the same level with its predecessor. Still, I enjoyed Jasper Kent’s “Thirteen Years Later” for its historical flavor, supernatural twist and hard tried protagonist, Aleksei Ivanovich Danilov. Therefore, I will gladly buy a ticket for the upcoming ride in Jasper Kent’s “The Danilov Quintet”, “The Third Section”.
Posted by Mihai A. at 1:30 PM