Recently I’ve posted the cover artwork for the new edition of the first volume of Glen Cook’s “The Last Chronicle of the Dread Empire”, “Reap the East Wind”, due to be released by Night Shade Books on October. Last week, Night Shade Books revealed the covers of the next two volumes of the “The Last Chronicle of the Dread Empire” series, the new edition of “An Ill Fate Marshalling” and the original and final “A Path to the Coldness of Heart” (scheduled to be released 20 years ago, but delayed so long because the manuscript was stolen). Once again the artist responsible for these beauties is Raymond Swanland and once again I found myself speechless before his artworks. Especially in front of the cover of “An Ill Fate Marshalling”, that looks absolutely gorgeous. I am eagerly looking forward to buy a copy of these volumes when they will be released, “Reap the East Wind” on October, “An Ill Fate Marshalling” on December and “A Path to the Coldness of Heart” on January 2012, to complete a series of excellent covers for Glen Cook’s “Dread Empire” novels. 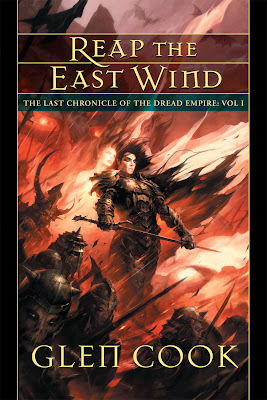 It has ended. It begins again. In Kavelin: Lady Nepanthe's new life with the wizard Varthlokkur is disturbed by visions of her lost son, while King Bragi Ragnarson and Michael Trebilcock scheme to help the exiled Princess Mist re-usurp her throne - under their thumb. In Shinsan: a pig-farmer's son takes command of Eastern Army, while Lord Kuo faces plots in his council and a suicide attack of two million Matayangans on his border.
But in the desert beyond the Dread Empire: a young victim of the Great War becomes the Deliverer of an eons-forgotten god, chosen to lead the legions of the dead. And the power of his vengeance will make a world's schemes as petty as dust, blown wild in the horror that rides the east wind. 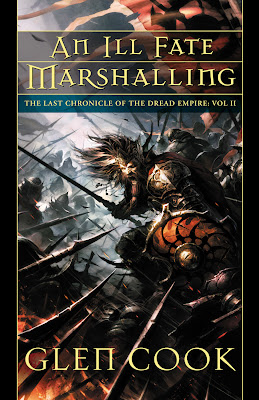 King Bragi Ragnarson decides to join Chatelain Mist's coup against the Dread Empire. Varthlokkur -- the King's wizard -- tries to dissuade Ragnarson from this chosen path, but only the drum-beat of war is heard. The King's Spymaster Michael Trebilcock joins with the wizard to stave off The Ill Fate Marshaling, to no effect.
Many of the characters from past volumes take center stage, and the climatic events of this book shake the world of the Dread Empire to its very core, creating A Path to Coldness of Heart. 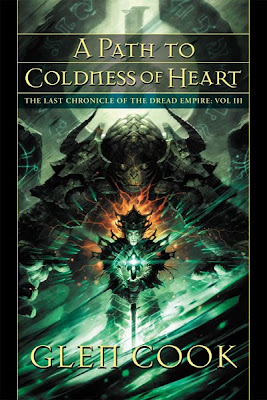 At long last, the conclusion to Glen Cook's Dread Empire saga has arrived! King Bragi Ragnarson is a prisoner, shamed, nameless, and held captive by Lord Shih-kaa and the Empress Mist at the heart of the Dread Empire.
Far away in Kavelin, Bragia's queen and what remains of his army seek to find and free their king, hampered by the loss or desertion of their best and brightest warriors. Kavelina's spymaster, Michael Trebilcock, is missing in action, as is loyal soldier Aral Dantice. Meanwhile, Dane, Duke of Greyfells, seeks to seize the rule of Kavelin and place the kingdom in his pocket, beginning a new line of succession through Bragia's queen, Dane's cousin Inger. And in the highest peaks of the Dragona's Teeth, in the ancient castle Fangdred, the sorcerer called Varthlokkur uses his arts to spy on the world at large, observing the puppet strings that control kings and empires alike, waiting... For the time of the wrath of kings is almost at hand, and vengeance lies along a path to coldness of heart.
Posted by Mihai A. at 1:16 PM