Title spotlight - "A Book of Horrors" edited by Stephen Jones 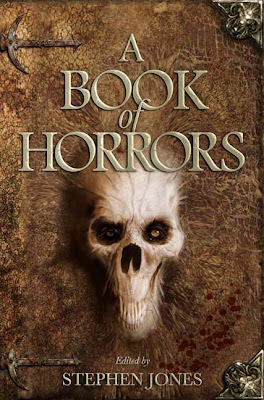 Stephen Jones starts his new anthology, “A Book of Horrors”, wondering about the present situation of the horror genre: “What the hell happened to the horror genre? Whatever happened to menacing monsters, vicious vampires, lethal lycanthropes, ghastly ghosts and monstrous mummies? These days our bloodsuckers are more likely to show their romantic nature, werewolves work for covert government organisations, phantoms are private investigators and the walking dead can be found sipping tea amongst the polite society of a Jane Austen novel.”

I have to say that these days, for me, vampires and zombies are totally lost. I very rarely tend to pick a book up that feature these creatures, mainly because their romantic side looks very odd and unappealing for me. Well, I also have to admit that I don’t mind a few hard boiled, monster private investigators, but only occasionally and I do hope that this doesn’t turn into a fashion as well, because I will see myself running away from it too in that case.

But this time there is no room for the soft part of these creatures, instead Stephen Jones, one of the most prolific editors of the horror fiction, brings this genre back on his rightful track. “A Book of Horrors” is an original anthology of horror and dark fantasy and features some heavy names in its line-up, such as Stephen King, Ramsey Campbell, Reggie Oliver, Michael Marshall Smith, Elizabeth Hand, Richard Christian Matheson, Caitlín R. Kiernan and John Ajvide Lindqvist, just to name a few. Stephen Jones’ “A Book of Horrors” will be hosted by the newly formed imprint of Quercus Books, Jo Fletcher Books, ran by the excellent former Associate Publisher of Gollancz, Jo Fletcher, and scheduled to be released around Halloween. However, Stephen Jones’ “A Book of Horror” comes in two limited editions as well, co-published by Cemetery Dance Publications and PS Publishing, one thousand copies signed by Stephen Jones and Les Edwards (who made yet another awesome cover) and one hundred copies of the traycased edition signed by all the contributors. I am not sure if I can afford one of these limited editions, certainly not the traycased edition, but I would certainly pick a copy of Jo Fletcher Books edition, because Stephen Jones’ “A Book of Horrors” looks too good to be passed by.

Open this book at your own peril! That is because this volume is exactly what it say on the cover—A Book of Horrors contains all-original stories by some of the most successful and exciting names in modern horror fiction. For the first time in many years, here is an original anthology of horror and dark fantasy in all its many and magnificent guises—from classic pulp-style tales of Dark and Stormy Nights, through more contemporary and psychological terrors, to the type of cutting-edge fiction that only the very best horror fiction can deliver. Brought together from around the world by World Fantasy Award-winning editor Stephen Jones, one of Britain's most acclaimed and experienced anthologists of horror fiction, here are many of the authors who have helped shaped the genre in all of its forms, along with terrifying tales of unease by a new generation of storytellers devoted to the Dark Side. But be warned: once you begin to delve within these pages, your imagination and senses will be assaulted by terrors both grim and gruesome, literary and lethal, that will stay with you long after you have closed its covers and tried to put aside the images and situations which have wormed their way deep within your mind. Don't blame us for the bad dreams or cold sweats that these tales will induce. We did tell you—this is A Book of Horrors, and once you open it there is no way that these scarifying stories will ever be forgotten... no matter how much you wish that the nightmares will just go away!

“Introduction: Whatever Happened To Horror?” by Stephen Jones
“The Little Green God of Agony” by Stephen King
“Charcloth, Firesteel and Flint” by Caitlín R. Kiernan
“Ghosts With Teeth” by Peter Crowther
“The Coffin-Maker’s Daughter” by Angela Slatter
“Roots and All” by Brian Hodge
“Tell Me I’ll See You Again” by Dennis Etchison
“The Music Of Bengt Karlsson, Murderer” by John Ajvide Lindqvist
“Getting It Wrong” by Ramsey Campbell
“Alice Through The Plastic Sheet” by Robert Shearman
“The Man In The Ditch” by Lisa Tuttle
“A Child’s Problem” by Reggie Oliver
“Sad, Dark Thing” by Michael Marshall Smith
“Near Zennor” by Elizabeth Hand
“Last Words” by Richard Christian Matheson

That sounds great, Mihai -- hadn't heard of A Book of Horrors before now but I'll be looking out for it come September. New Stephen King is really all the reason I need!

Of course I wouldn't say no to new Lindqvist or Kiernan, either. Thanks for keeping us up to speed!

Niall, the anthology looks great. Stephen King is one of the reasons behind my interest too, but Stephen Jones' is the one who convinced me about it long before I saw the line-up :)