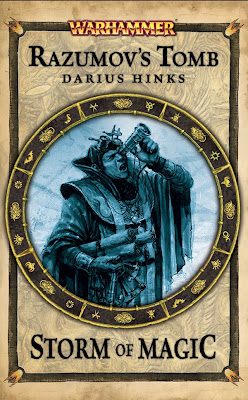 "Razumov's Tomb"
by Darius Hinks
Publisher: The Black Library
The review is based on a bought copy of the book

As the Chaos moon of Morrslieb veers wildly off course, the Old World is wracked by a series of bizarre plagues. From a lofty spire of the Celestial College, the Empire's Grand Astromancer, Caspar Vyborg, scours the heavens for an explanation, seeking guidance in the stars. But as the Empire sinks further into madness and violence, his order is forced to search stranger places than the night sky - the investigation leads them to the grave of a long-dead sorcerer named Razumov and an ancient, half-remembered prophecy. Caspar decides that his only hope is to complete the dark rituals that killed Razumov centuries earlier, but as Morrslieb waxes full and ferocious magical storms begin to tear the very fabric of reality, Caspar learns the true, terrible nature of Razumov's tomb.

The Warhammer gaming universe came to a turning point this July with the release of Storm of Magic, the largest expansion released to date for this game. The winds of magic blow through the Warhammer universe in great force and maelstroms shatter the world changing the land and unleashing new monsters in this vast setting. This brings major changes to the game, but it is not where my interest lies. Not because I would not be attracted by such a game, but because due to my location and difficulties resulting from it, the Warhammer game and accessories were inaccessible commodities for a very long period of time. However, I did follow the reflection of this universe in the world of fiction, reading as many Black Library’s Warhammer series of novels as possible.

The changes brought by the expansion of the Warhammer universe are only naturally felt on the fiction section too. Darius Hinks’ “Razumov’s Tomb” is the first in a series of three novellas released by Black Library this summer to capture the changes brought by the blowing of the Storm of Magic on the fiction universe of Warhammer. The reader discovers early on the changes suffered by the setting and the awakening of powerful magic. Magic, that comes out with all guns blazing, takes the major role in Darius Hinks’ novella by sheer force. Strange and new creatures roam the land surprising its inhabitants, barely remembered prophecies will come to pass, huge armies of beastmen or undead try to overpower their enemies, one long buried and asleep behemoth will be awaken, all succeed on the “Razumov’s Tomb” canvas to bring the reader a high-speed action story. There is a bit of fighting too, but only as garnish for the main course, the clash of magic.

Caspar Vyborg, Grand Astromancer of the Celestial College, follows a prophecy in the hope that its predicted outcome will not come to pass. Discovering the prophecy and an all too important location is his apprentice, Gabriel Bloch, with whom Caspar will face the blowing winds of magic in unexpected ways. A small conspiracy awaiting the two wizards brings them in plenty of difficult situations, but to some hilarious moments too. Actually, the entire Darius Hinks’ novella is a bit lighter than the usual fiction I read on the Warhammer universe. There is plenty of humor in “Razumov’s Tomb” that lightens the heavy atmosphere, but also a small measure of irony, which brought a great smile for me in the final sequences of the novella. As a matter of fact, the final moments of “Razumov’s Tomb” sweetens plenty of dark consequences left by the winds of magic on the story.

I am not sure how the Storm of Magic affects the Warhammer gaming universe, but on the fiction section it is an interesting change. And although Darius Hinks’ “Razumov’s Tomb” is not a memorable reading, it offers a fantasy story with a quick pulse, full of strange creatures and magic, for those looking for it.