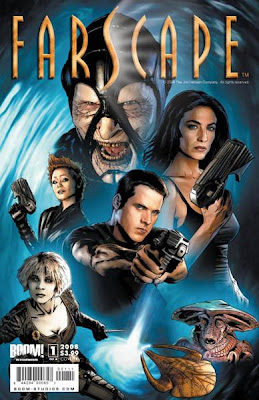 Farscape #1
Story by: Rockne O'Bannon
Script: Keith R.A. Decandido
Artist: Tommy Patterson
Colorist: Andrew Dalhouse
Letterer: Ed Dukeshire
Publisher: BOOM! Studios
Farscape #1 is the first in a four issues series released by BOOM! Studios in the renowned universe of the successful Farscape TV series.
The first issue is called “The Beginning of the End of the Beginning, Part 1: The Return of the King” and picks up the action from where the TV miniseries Farscape: The Peacekeepers Wars left it. John Crichton and Aeryn Sun are looking for a planet where to withdraw together with their son. On the other hand Rygel is looking forward to his return home and the retake of his lost throne.
I found the setting and the action familiar and I believe that many of those familiar with the TV series will feel the same. However, the issue has a two pages introduction which will help those unfamiliar with the show enjoy the series as well. Farscape #1 builds the climate for the action packed issues that will follow. I say the action packed issues because I could see the story growing toward its high climax. Also the end of the first issue and the background story sustained by a mysterious figure that follows John and Aeryn Sun promise for the next issues action in Farscape style.
The other thing which will make those familiar with the series feel right at home is the art. The drawings bring back the familiar characters and made me believe that I was still watching an episode of Farscape. The other drawings are attractive as well making a visual which pleased me and made me enjoy the comic a lot. The dialogues stand in the favor of the comic as well, with the amusing replicas and they give the same sense of familiarity as the action and drawings.
Overall, Farscape #1 offered me a pleasant reading and the same enjoyable time as the TV series. I’m certain that the rest of the series will not disappoint me and it will make me feel as the first issue did.
Posted by Mihai A. at 11:45 AM

want. I'm going to have to get a second job or start mugging people to feed this terrible book habit.

I understand you perfectly :)
Every time I use the Internet it seems that I find a book that yells at me: "Buy me! Buy me!" :D

Did you know, there are rumors that they may be doing new web episodes of the show? How awesome would that be ?

Sweet, I believe that will be a show on the web. I don't know details, but I am curious to see such a show :)

Farscape is my favorite show. i usually watch it. i came to know about it from my friend,then i took interest in it. i think it is best show

It is a very good show indeed :)

I am also huge fan of Farscape tv show.