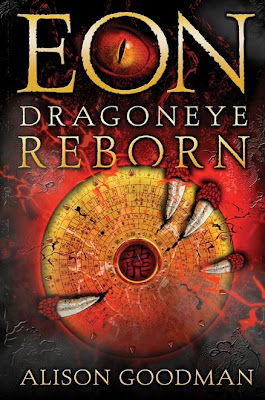 Well it looks like Dark Wolf’s Fantasy Reviews reached another milestone, the 200th post. When I’ve start my blog I didn’t set any goals for it and I was doing for fun. Well, I am still having fun and as long as I keep having a wonderful time I will try to blog about my passion. Still, I had a lot of help along the way and I like to thank all of you, my friends for helping me start and keep going, readers for coming here and making all even more worthwhile and publishers and authors for all their help and reading and reviewing material. And if I am late in reviewing some of the books received, please accept my apologies and let me assure you that sooner or later I will get to them :)
Also a big thank you goes to the nice people of Penguin and their marketing campaign. With their help I am able to associate my milestone with the first giveaway of my blog (hopefully it will not be the last as well). So, with this occasion you have a chance to win a copy of Alison Goodman’s novel “EON: Dragoneye Reborn”, an EON poster and an EON pin. “EON: Dragoneye Reborn” was released on December, 26th, 2008 and here is a synopsis of Alison Goodman’s novel:
Under the harsh regime of an ambitious master, young Eon is training to become a Dragoneye, the human link to an energy dragon's power. His intensive study of Dragon Magic, which is based on the Chinese zodiac, involves two kinds of skills: sword-work and magical aptitude. Eon is lamed, and lacks the physical strength of his fellow trainees, but his unnaturally strong connection to the energy dragons helps him rise above the rest.
In a spectacular sequence of events, Eon is thrust into the heart of a lethal struggle for the Imperial throne. In this new, treacherous world of hidden identities and uneasy alliances, Eon faces a vicious enemy who covets the young Dragoneye's astounding power, and will stop at nothing to make it his own. But Eon is playing a dangerous game: he is in fact Eona, a young woman whose true identity must remain hidden, for discovery would mean instant death.
Inspired by the rich myths and traditions of Ancient China, shimmering with energy dragons, filled with dazzling swordplay and fraught with tension, this is a fast-paced, exhilarating page-turner.
But that’s not all, the lucky winner will find that the prize includes two other books, Frank Beddor’s “The Looking Glass Wars” and Robin McKinley’s “Chalice”. To enter in the competition send me an e-mail at MihaiTheDarkWolf AT gmail DOT com (please replace the AT and DOT with the proper symbols) until Sunday, January 25th, with your name and adress, only one entry per person. The competition is open worldwide. I’ll announce the winner on Monday, January 26th.
Good luck to all!
Posted by Mihai A. at 1:40 PM

Buna Seara Mihai,
I shall be emailing you soon to enter this competition.

noooo, the precios book shall be mine...evil hahahaha :)
Nice contest Mihai, i will send you the e-mail, thank you and thanks to the publisher for this oportunity. I heard good things about this book.

first of a all CONGRATULATIONS !!
Wow!!
Your first giveaway.

Good luck to all participants.

Mulluane, I know exactly what you mean "evil grin"

Bogdan & Michael, thank you very much and good luck :)

Mulluane, Adele, Edi, Kyo, I'm so sorry to tell you this but that copy has my name all over it (in the fine-print, you see), so you all may as well give up. :-)