Cover Art - "The Name of the Wind" by Patrick Rothfuss 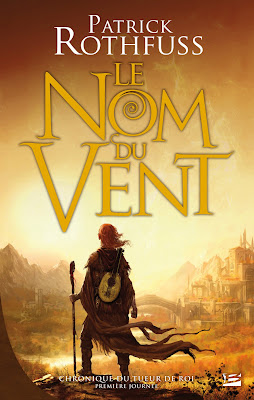 One of the best books I read last year and which it became one of my favorite fantasy novels is Patrick Rothfuss’ “The Name of the Wind”. This novel is also a good example and backup for the expression “don’t judge a book by its covers” since I wasn’t thrilled by one particular artwork featured on one of the novel’s editions. Here it is the cover artwork for the French edition of “The Name of the Wind” ("Le Nom du vent") due to be released this month by the Bragelonne publishing house and made by the French artist Marc Simonetti. I am impressed by Bragelonne and considering that it was founded only in 2000 their work is truly amazing. I hope that Patrick Rothfuss’ “The Name of the Wind” will be translated for the Romanian market soon, because it is a great novel, and I hope that will have a cover at least as this one.
Posted by Mihai A. at 1:05 PM

I LOVE this cover.

I am reading this book right now and I having a really hard time. You see..I love it so much, I don't want to read it so it won't end. I know. I am crazy.

I can honestly say I didn't like the cover of the book that I saw, it had a pond and leaves on it (who would like to read that). I know I shouldn't judge a book by its cover and all that but I have a stack of books to read so I've put off this book, I guess I'll have to take a second look at it.

Ana, you are not crazy. And if you are you are not alone :D I too sometime wish that some books never end :)

Cindy, not to woory, I experienced something similar with other books. I highly recommend "The Name of the Wind" :)

I try not to let a cover influence my dollar, but sometimes it's difficult to get past an awful cover. Packaging a book is so important: you would think the publisher knows that. But tastes vary.

I try to not be influenced by a cover too and it works most of the times. But rarely it happens for me not to like a cover at all, so I look for alternatives.
And one of the things I would like to see is how works the art department of a publishing house. Maybe someday my wish will come true :)