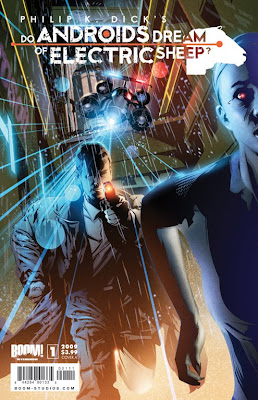 Award-winning letterer and designer takes on "the full novel fully illustrated" bold experiment
Issue #1 Features Covers by Denis Calero, Bill Sienkiewicz, Scott Keating & Moritat
Issue #1 also Includes Backmatter by Warren Ellis
Issue #2 to Include Backmatter by Matt Fraction
Issue #3 to Include Backmatter by Ed Brubaker
"Philip Dick, to my mind, was the great visionary writer of the 20th Century." - Warren Ellis
"After I finished reading the screenplay for BLADE RUNNER, I got the novel out and looked through it. The two reinforce each other, so that someone who started with the novel would enjoy the movie and someone who started with the movie would enjoy the novel." - Philip K. Dick 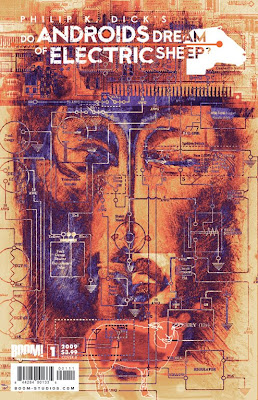 Richard Starkings brings his unique eye and talent to BOOM! Studios new maxi-series DO ANDROIDS DREAM OF ELECTRIC SHEEP? The Eisner Award-winning designer has won "Best Letterer" six times in a row from The Comic Buyers' Guide and "Best Letterer" nine times in a row from Wizard Magazine and revolutionized comic book lettering digitally with his company Comicraft.
"Anyone who's been paying attention to ELEPHANTMEN knows I have a special place in my heart for BLADE RUNNER and Philip K. Dick," said Richard Starkings. "I read DO ANDROIDS DREAM OF ELECTRIC SHEEP? when I was a teenager and have been working my way through Dick's novels ever since. It's really nice to be involved with the comic book. 'Nice' is English for 'Awesome,' by the way."
Also known as the creator of ELEPHANTMEN, published by Image Comics, Starkings has authored the definitive guide to digital lettering entitled COMIC BOOK LETTERING: THE COMICRAFT WAY with John Roshell. Starkings and Roshell also sell fonts they create through the company Comicbookfonts.com, including fonts based on lettering from top creators such as WATCHMEN's Dave Gibbons, HEROES' Tim Sale, X-MEN's Jim Lee, and TO MUCH COFFEE MAN's Shannon Wheeler. 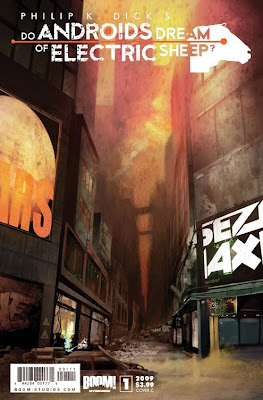 "Starkings has changed the way we read comics today," BOOM! Studios Marketing and Sales Director Chip Mosher stated. "And pairing the writing of Philip K. Dick with the lettering of Richard Starkings was a no brainer. It doesn't get any better than this!"

"They say that the letterer is the writer's inker," BOOM! Studios Editor-in-Chief Mark Waid said. "And when you are dealing with the best writer in science fiction, you have to pair him with the best lettering in the business. Starkings is that guy."
The first issue of BOOM! Studios' DO ANDROIDS DREAM OF ELECTRIC SHEEP? will include backmatter by Warren Ellis and ships with three covers in a 50/25/25 split by Denis Calero, Bill Sienkiewicz and Scott Keating. A fourth cover by ELEPHANTMEN artist Moritat will be offered as a 1-in-25 incentive.

Additionally, UNCANNY X-MEN's Matt Fraction will be providing backmatter for issue #2 and CAPTAIN AMERICA and CRIMNAL's Ed Brubaker will be providing backmatter for issue #3.
Along with Starkings for the full 24 issue run will be Tony Parker (WARHAMMER 40,000: FIRE AND HONOUR) on line art and Blond (ULTIMATE FANTASTIC FOUR) on colors.
DO ANDROIDS DREAM OF ELECTRIC SHEEP? ships this June (Diamond Code APR090725) and will present the full text of the novel fully illustrated, mixing all new panel-to-panel continuity in an innovative, ground-breaking 24-issue maxi-series experiment. 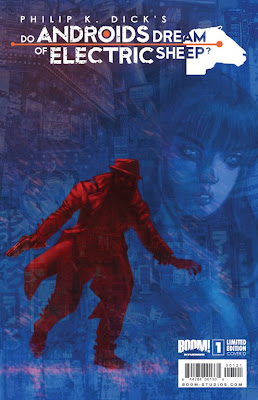 About BOOM! Studios
BOOM! Studios (http://www.boom-studios.com/) is a unique publishing house specializing in high-profile projects across a wide variety of different genres from some of the industry's biggest talents, including Philip K. Dick's DO ANDROIDS DREAM OF ELECTRIC SHEEP?, The Henson Company's FARSCAPE, and the original Mark Waid series IRREDEEMABLE. BOOM! recently launched its youth imprint, BOOM! Kids, with Pixar's THE INCREDIBLES, CARS, and TOY STORY, as well as Disney's THE MUPPETS. This year, BOOM! Studios celebrates its fourth anniversary.
About Electric Shepherd Productions
Electric Shepherd Productions LLC (http://www.electricshepherdproductions.com/) was founded by Laura Leslie and Isa Dick Hackett, daughters of the late Science Fiction author Philip K Dick. "ESP" is the production arm of the Dick Estate, dedicated to the stewardship and adaptation of the Philip K. Dick library across all media.
Posted by Mihai A. at 2:29 PM

Yes, exactly, although Dick's books have been used for numerous film scripts I came to this one via Blade Runner but really enjoyed reading the book too. I've always been amazed that I never came across him when I was younger. I was reading Azimov, Heinlein, Vogt, Windham etc but never found Philip K Dick.

Keith, the same thing happened to me :)
I saw first the "Blade Runner" and just after that I discovered Philip K. Dick. And really enjoyed both, the movie and the book :)