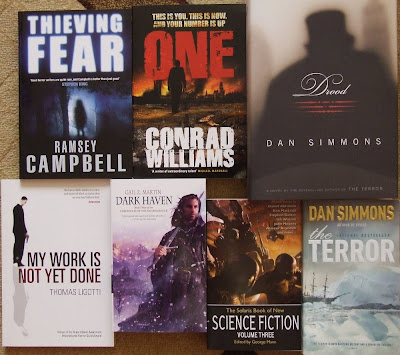 This are the books I received lately and I added to this post the novels' blurb from their publishers websites since it will take a while until I review them all:
- "My Work is Not Yet Done" by Thomas Ligotti (through the courtesy of Virgin Books);
When junior manager Frank Dominio is suddenly demoted and then sacked it seems there was more than a grain of truth to his persecution fantasies. But as he prepares to even the score with those responsible for his demise, he unwittingly finds an ally in a dark and malevolent force that grants him supernatural powers. Frank takes his revenge in the most ghastly ways imaginable - but there will be a terrible price to pay once his work is done.
Destined to be a cult classic, this tale of corporate horror and demonic retribution will strike a chord with anyone who has ever been disgruntled at work.
- "Thieving Fear" by Ramsey Campbell (through the courtesy of Virgin Books);
Charlotte Nolan and her cousins may not have ended up in the jobs they hoped to have when they were teenagers, but they've made their way in life. Charlotte works for a London publisher, Ellen cares for the elderly, Hugh has left teaching to work in a supermarket while his brother Rory is a controversial artist. Then more than their jobs begin to go wrong as something reaches out of the past for them.
What has it to do with the summer night they spent on Thursaston Common? If the dreams they had that night are catching up with them, how is the Victorian occultist Arthur Pendemon involved? Before the nightmare ends more than one of them will have to enter what remains of Pendemon's house and confront what still lives there in the dark.
- "One" by Conrad Williams (through the courtesy of Virgin Books);
This is the United Kingdom, but it's no country you know. No place you ever want to see, even in the howling, shuttered madness of your worst dreams. You survived. One man.
You walk because you have to. You have no choice. At the end of this molten road, running along the spine of a burned, battered country, your little boy is either alive or dead. You have to know. You have to find an end to it all. One hope.
The sky crawls with venomous cloud and burning red rain. The land is a scorched sprawl of rubble and corpses. Rats have risen from the depths to gorge on the carrion. A glittering dust coats everything and it hides a terrible secret. New horrors are taking root. You walk on. One chance.
- "Dark Haven" by Gail Z. Martin (through the courtesy of Solaris Books);
Matris Drayke, king of Margolan, is faced with the challenge to rebuild his shattered kingdom. With his wedding weeks away, Tris must address the trials and executions of those responsible for the atrocities against Margolan’s people. Jonmarc Vahanian, the new Lord of Dark Haven, and one of Tris's allies, faces trouble with the Blood Council, where there is defiance against the prospect of a mortal lord. And beneath Dark Haven, the Flow, the vast river of power damaged when Arontala wrested the Soulcatcher from Dark Haven’s foundation, is becoming unstable, threatening the balance of magic itself, and the future of the Winter Kingdoms.
- "The Solaris Book of New Science Fiction Volume Three" edited by George Mann (through the courtesy of Solaris Books);
Solaris has become known for its high quality anthologies. This SF collection is no exception with a with all original short stories from some of the world’s finest genre authors including Daniel Abraham, Ken MacLeod, Stephen Baxter, Ian Watson, John Meaney, Alastair Reynolds and more.
- "Drood" by Dan Simmons (through the courtesy of Little, Brown and Company);
On June 9, 1865, while traveling by train to London with his secret mistress, 53-year-old Charles Dickens--at the height of his powers and popularity, the most famous and successful novelist in the world and perhaps in the history of the world--hurtled into a disaster that changed his life forever.
Did Dickens begin living a dark double life after the accident? Were his nightly forays into the worst slums of London and his deepening obsession with corpses, crypts, murder, opium dens, the use of lime pits to dissolve bodies, and a hidden subterranean London mere research . . . or something more terrifying?
- "The Terror" by Dan Simmons (through the courtesy of Little, Brown and Company).
The men on board HMS Terror have every expectation of finding the Northwest Passage. When the expedition's leader, Sir John Franklin, meets a terrible death, Captain Francis Crozier takes command and leads his surviving crewmen on a last, desperate attempt to flee south across the ice. But as another winter approaches, as scurvy and starvation grow more terrible, and as the Terror on the ice stalks them southward, Crozier and his men begin to fear there is no escape. A haunting, gripping story based on actual historical events, The Terror is a novel that will chill you to your core.
Thank you all very much!
Posted by Mihai A. at 3:35 PM

Dark Haven and Terror are on my shelf.
My wife read Terror and told that's an awesome book.
I read several reviews sffworld DROOD review, The Book Smugglers DROOD review, mostlyfiction DROOD review of Drood and keen to read by myself...

I got Dark Haven in the mail the other week too!

Michael, I was looking for "The Terror" because I heard many beautiful things about it.

Cindy, I have to see the entire series :)

Mihai, it's wierd...you get your ARC of Drood, while I'm still waiting and waiting. The publisher sent it out twice: once by mail and once by courier, but neither has arrived. Is someone telling me I'm not to review it? I really want to read it!!!

But I'll certainly read your review when it comes.

Barbara, that is happening to me sometimes too. I thought that the distance was a problem, but it seems is not :)