"Kill or Cure" by Rebecca Levene 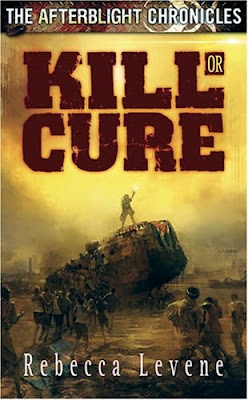 "Kill or Cure"
by Rebecca Levene
Format: Paperback, 304 pages
Publisher: Abaddon Books
Jasmine has spent five years underground, locked in a secret government bunker with no one but the skeletons of her colleagues for company. Outside, the world has gone to hell, a mysterious virus killing all but 1 in 20 of the world's population.
It's enough to drive anyone mad ­ but Jasmine's crazier than most. The cure she was working on had an unexpected side effect, psychotic symptoms which only the most powerful drugs can suppress. Jasmine's rescuers, the pirate rulers of the new Caribbean, don't care ­ they need her help to discover what it is that has turned the inhabitants of Cuba into rabid killers who experience neither fear nor pain. Jasmine's quest to find a cure for this new plague, as well as for her own barely suppressed madness, draws her across the fractured continent of America and into the darkest recesses of her own past.
One of my favorite sub-genres of Science Fiction, if not my top favorite, is post-apocalyptic fiction and one of the series that feeds my readings with such novels is The Afterblight Chronicles published by Abaddon Books. Also, from time to time I feel the need to read a book which is packed with action scenes and adrenaline rush and this time Rebecca Levene’s novel, “Kill or Cure”, set in The Afterblight Chronicles universe offered me this read.
Rebecca Levene’s novel is very similar with a run in full flight, a run which gives very few moments to take your breath. “Kill or Cure” is fully packed with actions scenes, set in a violent world and in which only the strongest may survive. The novel takes place in the usual setting of “The Afterblight Chronicles”, after the world was devastated by a virus, the Cull, which killed all the population who doesn’t have a 0 negative blood type. What I find very interesting at this setting, and it shows really well in this novel too, is the fact that the world turned from a paranoid and violent one into an even more violent one. I believe that such a scenario is not a very pleasant one, but plausible nonetheless. Also, very interesting is that the novel points out one resource that becomes the most precious, humans.
The main character, Jasmine, is an interesting one, with great difficulties in facing her addiction on anti-psychotics and the human encounter after five years of isolation. Also it is interesting to see the changes she suffers since her world has fallen and the new one puts her in front of decisions and reactions she hasn’t imagined before. Together with Jasmine, other four characters will race across the North American continent and the Caribbean and will spill their share of blood. What supplements this group’s raised pulse adventures is the intrigue of the story and the unexpected twists and turns.
Rebecca Levene’s “Kill or Cure” is another Afterblight Chronicles book which is fun and relaxing, full of action scenes, bloodshed and a dark vision of the future of our world (but not completely hopeless).
Posted by Mihai A. at 11:20 AM

I really liked this book. And because I liked it and its prequel as well, there may be some good news for the Romanian readers very soon :)

Love the cover. Don't know why but it reminds me of the Deathlands series. Apocalyptic fiction - yum.

Bear, that will be good news indeed. I recommend "School's Out" too, which I enjoyed even more than "Kill or Cure" :)

Doug, Deathlands is the series with over 80 books? It is an interesting one too :)

I started to read and like an other ABADDON BOOKS series: PAX BRITANNIA
Even I'm not a fan of post-apocalyptic scenarios I have to admit that your review is really mouth watering.

Thank you, Michael :)
They have a few interesting series at Abaddon, but my favorite remains The Afterblight Chronicles.