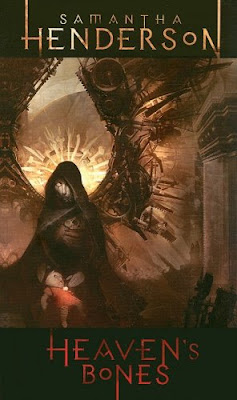 "Heaven's Bones"
by Samantha Henderson
Format: Paperback, 320 pages
Publisher: Wizards of the Coast
Devotion given through murder is no less loving.
Dr. Sebastian Robarts' days are spent building angels out of the bodies of women, gifts to his wife and child that he couldn't save. But there is a man who sees his angels as weapons to storm heaven. Trueblood, a Vistani gifted with Cursing and a searcher for arcane knowledge, finds Dr. Robarts. He sees only a weak man whose labor can be used to end the curse that stole Trueblood's name and cast him out of his family. As he tries to bend Robarts to his own ends, other people find them and some try to stop them, and through it all, Dr. Robarts works.
After all, Dr Robarts loves his wife very much.
Samantha Henderson's "Heaven's Bones" is a novel set in the gaming world of Ravenloft, but it can be taken as a separately dark fantasy/horror novel as well.
The author sets her novel in the 19th century, on three locations in the United States, the United Kingdom and the alternate world of the Mists. I find the action set in the Victorian England the most captivating one, especially since Samantha Henderson catches and builds the atmosphere through very good descriptions, through a constant and pressing presence of mists and through a location and events that reminded me of a notorious and still unidentified serial killer. All the characters of this part move naturally in this environment, making their contribution to the realistic atmosphere of the Victorian England through well caught class stratification, situations and prejudices of that period that surround them.
The events of the novel will bring the reader in front of the horror and fantasy aspects of the story. I really liked how Samantha Henderson worked on the horror ones and I wished that the fantasy ones would have been a little more developed. I liked that the author doesn't intent to shock the reader through excessive use of violence and gore, but through common situations and provoking images, grotesque ones but with their rightful place in the story. The fantasy aspects are interesting as well, but under-developed in my opinion and with a few missing links.
However, although I enjoyed the novel there are aspects which can make this read difficult and can drive some of the readers away. The novel start is confusing and slow, it follows storylines that at first can't seem to be related and left me wondering of their connection. It's only after almost half a book that the connections are made and the storylines start to interlock each other. Also I believe that the novel has too many characters, this aspect preventing the development of them (although I liked some of these characters) and with a few that left me wondering of their true purpose in the story. I honestly believe that the novel would have been stronger if some characters and a storyline would have been eliminated and if the story of Trueblood would have been more in depth built.
I enjoyed the novel, but I find it a little rough, with a first quarter through which I struggled not to put it aside and with its ups and downs. Samantha Henderson proves to be a talented author, but I believe that "Heaven's Bones" will not appeal to every reader.
Posted by Mihai A. at 9:48 AM